Going to the big match tonight? Going for the football or the alcohol? 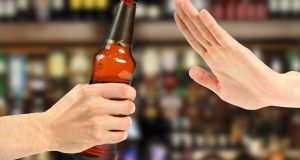 The busiest day for off-licences in Ireland is Holy Thursday. Wonder why.

1 – The ban on the sale of alcohol on Good Friday is 89 years old this year. The Intoxicating Liquor Act, was introduced in 1927 and it prohibited the sale of all alcoholic drinks on Christmas Day, Good Friday and St Patrick’s Day. The St Patrick’s Day clause was repealed in 1960 so visitors coming to Ireland (or the Auld Sod as it was known) from overseas (America) could celebrate our national saint’s day in the way God intended.

2 – One of the four fields of Ireland has a different rule. You can buy booze handily enough once you cross the border from south to north.

3 – In recent months, the Minister for Justice Frances Fitzgerald has been lobbied hard by vested interests on removing the ban, but she’s not for turning. “I won’t be doing it this year,” she said before adding that it was an issue to be considered under new alcohol laws.

4 – The Vintners were raging with this kick into touch. “This is a lost opportunity not just for publicans but for the capital city and the tourist sector as a whole,” they fumed. “Once again thousands of tourists and holiday goers are going to be at a loss wondering why they can’t go to a pub for a drink.”

5 – Mind you the ban does lead to some light-hearted moments – at least for us. Like that time this writer was wandering aimlessly through Dublin city centre at around 5pm on a Good Friday. We came upon a large group of English men in their 20s and 30s surrounding one poor unfortunate. They were all scowling. “Well I didn’t facking know did I,” he was yelling as his former friends demanded to know why he had booked a stag weekend in Temple Bar on the worst day of the year for stag parties. Hilarious, right?

6 – Earlier this year, The Irish Times asked its online readers if they believed it was time to lift the Good Friday ban on the sale of alcohol. More than 6,300 people voted and 76 per cent said it was time it went.

7 – The ban is not universal. The 89-year-old law provided exemptions allowing anyone attending certain events or travelling by sea, rail, air or ferry to be sold alcohol. It can also be sold in a licensed theatre. And guests staying in hotels can be served alcohol. As long as it is taken with a meal.

8 – When the Vintners were calling for an end to the ban, they expressed concern for football fans attending the Republic of Ireland’s football game against the Swiss. Funnily enough, football fans are one of the few groups likely to be well served today. The Aviva Stadium can legal sell alcohol to anyone attending the match. The bars will be open from 5.30pm, more than two hours ahead of kick-off.

9 – You can’t just buy any old train ticket to gain admission to the Good Friday sort-of lock-ins mind you. If you want to be served in a train station you will need to be in possession of an inter-county train ticket. A Dart ticket from Connolly to Tara Street will be no good to you and the stern-looking bouncers will block your way.

10 – The Restaurants Association of Ireland (RAI) claims the ban will cost €25 million in lost revenue. Of course they could recoup some of that if they didn’t close their doors on Good Friday. There is nothing to stop them opening and selling food and non-alcoholic beverages.

11 – You might think it legal to bring your own bottle to a restaurant on Good Friday because the law prohibits the sale but not the consumption of alcohol in a restaurant. You’d be wrong. Restaurants would get into trouble if they allowed you to pull the cork on your Holy Thursday wine on Good Friday.

12 – The busiest day for off-licences in the Republic is Holy Thursday. People stock up like we were heading into a nuclear winter. According to a survey published this week, more than half of Irish adults will be knocking back some class of alcohol today. They’ll also be eating meat. The heathens.