Going out: something for the weekend

Fleadh Cheoil is under way in Derry, while competition heats up at the Community Games in Athlone IT 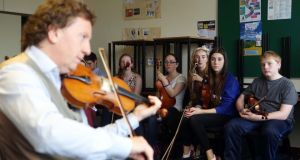 Tomorrow night, the 62nd festival will culminate in a battle for the coveted title of All-Ireland senior céilí band champions 2013.

Eminem: Slane Castle, Co Meath
The real Slim Shady will be standing up on stage at Slane Castle this evening.

One of the world’s most successful rappers, with sales of 100 million albums, Eminem will take to the stage with his live band after performances by Plan B, Earlwolf, Slaughterhouse and Chance the Rapper.

Community Games: Athlone IT, Co Westmeath
Children from all over Ireland will compete in more than 50 sports and cultural activities ranging from athletics to art to debating at this year’s HSE Community Games finals.

More than 8,000 children compete in the National Festivals every year.

‘The Phoenix Challenge’ All-Ireland scouting competition: Castle Saunderson International Scout Centre, Co Cavan.
More than 1,000 scouts from all over Ireland will be camping at this year’s Phoenix Challenge, an annual competition for scouts to showcase their campcraft skills.

Teams from both sides of the border representing all 32 counties will participate in events which are themed on peace. In addition to running their own campsite and cooking their own food, scouts will build a bridge across a lough, which will connect Northern Ireland and Southern Ireland.

Rose of Tralee Festival: Co Kerry
Ireland’s lovely girls contest is back again. Now in its 55th year, the Rose of Tralee festival is one of Ireland’s oldest.

While we won’t know the winner until Tuesday night , there’s still plenty happening today and tomorrow.

Pop sensations JLS treated fans to a live performance last night and the festival will also host the Coronas, The Stunning and Sharon Shannon.

There will be street entertainment, a carnival, markets, fireworks and the Rose Parade.