Give Me a Crash course In . . . Waterboarding in Northern Ireland 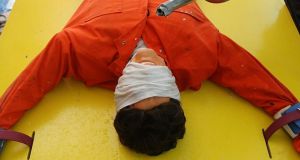 What is waterboarding exactly?

Waterboarding, widely considered to be a form of torture, simulates the sensation of drowning. A cloth is placed over someone’s face, then water is poured over it as they lie on a board that has been tilted back and down, so their head is lower than their feet. The water fills the person’s nose, sinuses, mouth and throat. Dating back to the Middle Ages, it has been known as water torture, the water cure and tormenta de toca. The technique, employed to extract confessions, came to prominence after the United States’ campaign against al-Qaeda following the 9/11 attacks on New York City and Washington, DC. Japan also used it on soldiers during the second World War, and it was used on North Vietnamese prisoners by US military. American soldiers are still put through waterboarding as part of their survival training.

Didn’t Donald Trump say something about it this week?

When he was asked about waterboarding on Wednesday, the new American president said he asked the US intelligence services, “Does torture work?” The answer, he said, was yes. He then added, “Do I feel it works? Absolutely, I feel it works.” Trump, who views it as an “enhanced interrogation technique”, went on to say that he would rely on his new defence secretary, James Mattis, and CIA director, Mike Pompeo, for guidance on bringing the practice back to the United States, where it is illegal. Both men said that they would oppose its reintroduction.

Why has waterboarding hit the headlines in Northern Ireland this week?

After Trump’s comments the Tory MP Bob Stewart, a former colonel in the British army who served in Northern Ireland during the Troubles, admitted on BBC radio, “Technically, as you look at it today, I was a kind of a torturer. Of course it was acceptable then. It’s now unacceptable, and now it’s defined as torture.” In addition, details of documents uncovered by the Pat Finucane Centre, in Derry, were broadcast by Channel 4 News. Secret British government memos were highlighted showing that, in 1972, Prime Minister Edward Heath knew that the army was allegedly using electrocution and waterboarding in Northern Ireland. The Pat Finucane Centre has said that further cases of waterboarding have been alleged, but to date these claims are without supporting documentation.

Has waterboarding come to light in the North before?

Yes. In 2012 the Belfast man Liam Holden had his 1972 conviction for the murder of a British soldier quashed. He spent 17 years in jail after a conviction based on a confession extracted by soldiers using the illegal technique. The latest revelations from the Pat Finucane Centre add to revelations from British government archives about the cabinet’s apparent authorisation of torture in the 1971 Hooded Men case. The group of Catholic men, interned in 1971, have said they are not surprised by Stewart’s comments to the BBC. They claim that they were tortured and have been campaigning for justice after being subjected to sleep and food deprivation and constant loud static noise for extended periods of time.

Amnesty International has called for a British government inquiry into the new allegations of torture in Northern Ireland in the 1970s. According to Amnesty’s Northern Ireland programme director, Patrick Corrigan, “The allegations against the UK are extremely grave: that they tortured their own citizens and that this was known about and covered up at the highest levels of government. This matter could not be more serious and merits a full independent investigation.” Paddy Ashdown, the former Liberal Democrats leader, has made similar calls. “As a soldier in Belfast in the 1970s, I am horrified some serving with me used torture,” he tweeted. “The full truth must now come out for exemplary reasons.”