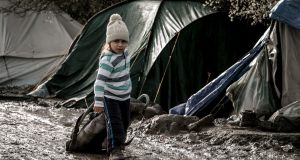 Wasn’t the Calais “jungle” supposed to be razed this week?

The prefect of Calais, Fabienne Buccio, ordered the closure of the southern part of the “jungle”, a shanty town on wasteland next to a chemical plant, 5km from Calais, on February 12th.

Thousands of Arab, African and Asian migrants live in tents and shacks in the jungle while they try to reach Britain through the Channel Tunnel. Buccio says up to 2,750 may remain in a “secure” zone, in heated freight containers and in a centre for women and children. Tuesday night was the deadline for the migrants’ departure.

The destruction of the shanty town was to have started on Wednesday. But the closure was suspended because NGOs and migrants filed a lawsuit saying their expulsion would be cruel and inhuman. On Thursday the Lille tribunal ruled that the evacuation could go ahead.

Buccio initially said she would give the migrants until Monday, March 7th, to move either to the northern part of the camp or to some 100 centres spread across the country. She then revised the deadline, saying: “It will take a month, perhaps more, to enforce our decree.” In recent months some 2,700 migrants accepted relocation.

“I hope we will not have to evacuate by force. Conditions are there for us to raze a part of the camp which gives a bad image of Calais,” Buccio said.

The prefecture said “social areas” including the school and church in the southern zone would be preserved.

Why do these thousands of men, women and children want to go to Britain, when they could apply for asylum in France?

The French jobless rate is over 10 per cent, and migrants know they cannot work or find housing while their asylum application is considered, a process that can take years. French public opinion is increasingly anti-Muslim and anti-migrant. Prime minister Manuel Valls has said France would take no more than the 30,000 refugees to which it has committed. Fewer than 100 Syrians have agreed to settle in France. They know they’re not wanted.

The British unemployment rate is 5.2 per cent and labour laws are more flexible than in France. Migrants know they can find work in the UK. Many speak English and some already have family in Britain.

Why is Calais an issue in Britain?

British prime minister David Cameron has used Calais as an argument in his campaign to keep Britain in the European Union. Under the 2003 Le Touquet accords, France stops migrants going through the Channel Tunnel. Cameron fears the French will rescind the agreement if Britain leaves the EU, and Calais- like “jungles” will spring up along Britain’s southern coast. French opposition politicians – who may come to power in 2017 – say Britain’s border is in Dover, not Calais. They don’t see why French security forces should do Britain’s dirty work.

What’s the connection between Calais and Belgium?

The Belgian government has re-established border controls between its western Flanders province and France, because they’re afraid migrants expelled from Calais will flock to the port at Zeebrugge.

Interior minister Jan Jambon mobilised 300 police and said Belgium will patrol land, sea and the sky if necessary to keep the migrants out. “The tourist season is about to start,” Jambon said. “We don’t want our coast to be affected.”

The Belgian move struck another blow to the Schengen accords on free movement, and infuriated the French government, who had not been consulted. Interior Minister Bernard Cazeneuve denounced the “strange” Belgian decision and said there “was never any question of the French government sending bulldozers to disperse the migrants” in Calais.