Bob Geldof has handed back his Freedom of the City of Dublin in protest at the fact that the award is also held by Myanmar leader Aung San Suu Kyi. Video: Bryan O'Brien 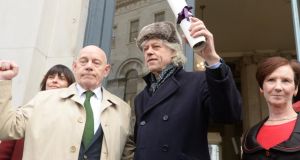 Bob Geldof with Independent councillor Mannix Flynn at Dublin City Hall where he returned his freedom of the city award. Photograph: Cyril Byrne 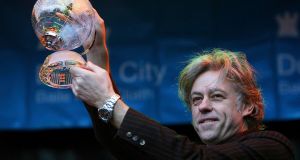 Photograph from March 2006 of Bob Geldof receiving the Freedom of Dublin City in a ceremony outside the Mansion House. The singer and businessman has said he will hand the award back, saying he does not want to be associated with it while it is also held by Myanmar leader Aung San Suu Kyi. File photograph: Julien Behal/PA Wire 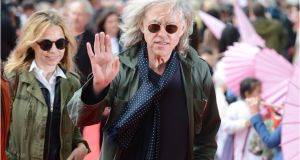 Bob Geldof outside the Bord Gais Energy Theatre ahead of the awarding of the Honorary Freedom of Dublin to Aung San Suu Kyi in 2012. Photograph: Dara Mac Dónaill

Bob Geldof handed back the scroll recording his Freedom of the City of Dublin to city council officials today in protest against the fact that the honour is also held by Myanmar leader Aung San Suu Kyi.

Speaking at City Hall on Monday morning, the Dublin-born singer, activist and businessman declared that he did not want to be on the same list as someone whom he said the UN described as a “genocidalist”.

Ms Suu Kyi, a Nobel Peace Prize winner, has been widely criticised by former supporters for failing to speak out against the violence being inflicted on thousands in her home country of Myanmar (formerly known as Burma).

More than 600,000 Rohingya Muslims have fled ethnic cleansing in the north of the country in the last three months, creating a major humanitarian crisis in neighbouring Bangladesh.

“Aung San Suu Kyi was extravagantly welcomed to this city,” said Mr Geldof, who was accompanied by Independent Dublin City Councillor Mannix Flynn. “I participated in that. And it turned out that she’s a killer.”

Ms Suu Kyi will be stripped of the freedom of the city of Oxford after the city council voted unanimously to support a cross-party motion deeming it “no longer appropriate” for her to hold the honour. 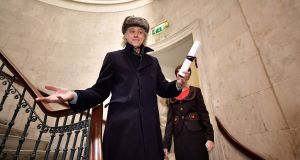 Mr Geldof said Ms Suu Kyi should also hand back the Nobel prize she won in 1991. “And perhaps she should appear at the Hague tribunal,” he said “Dublin should not have any truck with this woman. She’s let us Dubliners down and she’s let Ireland down, because we thought she was one thing and we’ve been duped. She’s a murderer.”

Asked whether he believed other recipients of the freedom of the city should follow his example, Mr Geldof said he was not asking them to do so. He cited Olympic champion Ronnie Delany as an example of someone whom he would “absolutely not” expect to take the same course of action.

He had been in touch over the past week with Bono and U2, he said. “They issued a very strong statement over the weekend. I gave Bono the heads-up and he called various people and he said: ‘Look, you know, I completely support this. But it’s a band and one man does not make that decision.’”

In a lengthy statement issued over the weekend, U2 condemned the actions of Ms Suu Kyi, who the band supported for many years during her house arrest by the Myanmar regime.

Mr Geldof said Bono had tried to put three or four calls through to Ms Suu Kyi, “because they’re friends”, but that she wouldn’t take the calls.

The former Boomtown Rats singer rejected criticism of his action by the Lord Mayor of Dublin, Mícheál Mac Donncha, who said it was ironic given his British knighthood. “Sinn Fein have always been apologists for mayhem and murder,” he said. “It’s a complete non-sequitur. I’m here to talk about genocide, mass murder, rape and the abuse of children.”

Both Mr Geldof and the council officials to whom he handed back his certificate of freedom seemed unsure about what would happen now. There is no record of anyone handing back their freedom of the city before. The names of those honoured are memorialised in an official book, and the full list of honourees appears on the Dublin City Council website.

It is unclear what action the council might take to acknowledge Mr Geldof’s action. Equally, any decision regarding the withdrawal of Ms Suu Kyi’s freedom is a matter for the elected councillors.

Only once in the council’s history has a freedom been withdrawn: Celtic studies scholar Kuno Meyer had his freedom removed in 1915 due to anti-German sentiment, but it was reinstated in 1920.

“I’d love them to remove her from the scroll,” said Mr Geldof. “ The problem for the council is there’s no constitutional way of doing that. Give Mannix and me a felt-tipped pen and we can just take her off. She doesn’t deserve to be honoured by Ireland or the city.”