Broadcaster had unique ability to tap into zeitgeist of each decade, new study finds 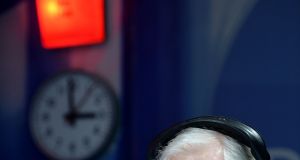 Gay Byrne was the first broadcaster in Ireland to instigate telephone technology as part of what we now know as ‘talkback radio’. Photograph: Alan Betson

“Gay Byrne was a catalyst for change for Ireland in that he got the nation talking, and he got them talking about issues that would never have previously been aired in public – sex, domestic violence, alcoholism, marriage problems, extramarital pregnancy, adoption.”

According to Dr Doyle O’Neill, Byrne has “a unique ability to tap into the zeitgeist of each decade”, and he did this from the 1960s to the late 1990s, when he stepped down from The Late Late Show on TV and The Gay Byrne Show on radio.

“Gay Byrne was the first broadcaster in Ireland to instigate telephone technology as part of what we now know as ‘talkback radio’, such as Liveline on RTÉ, ” said Dr Doyle O’Neill of the school of history at University College Cork.

“Throughout his prodigious career on radio, he performed a role similar to that of a media lay priest, who listened, dispensed advice and engaged with his audience without offering absolution or penance.

“And on television, he set the template for the latterday talk-show host, such as Graham Norton. He was the facilitator of all that social change that took place, via the airwaves, moving from a monochrome, insular Irish society to a far more liberal and pluralist Ireland.”

Her thesis about Gaybo is published in The Gaybo Revolution – How Gay Byrne Challenged Irish Society, which was launched last night in UCC by RTÉ broadcaster Anne Cassin.