Singer to hold press conference in the United States on Thursday 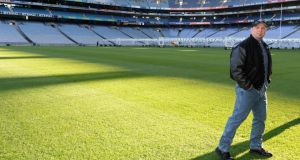 Labour Relations Commission chief executive Mr Mulvey, who was mediator for talks between Croke Park residents and GAA/Croke Park, said negative commentary made following his statement he would play “five or none at all” had made Brooks feel unwelcome.

“He’s a human being, a country western singer-he’s not a diplomat,” Mr Mulvey said.

“We’ve all said things that maybe in reflection you thought, ‘I shouldn’t have made that remark’.”

It is understood Brooks had originally planned to reveal details of his world tour when he arrived in Ireland but now that announcement has been brought forward to this Thursday.

“Are we going to be part of this world tour is a big question mark. I wouldn’t be putting any bets on it one way or another,” Mr Mulvey said.

“Why would he come when he feels he’s not welcome?”

Mr Mulvey said Peter Aiken, owner of the Aiken Promotions who applied for the licence for the five concerts, is flying to meet Garth Brooks in the US today to try convince him to play three concerts.

“There are some things that are best in a face-to-face basis,” Mr Mulvey said.

“All his effort is concentrated on getting him to come here for three days.”

“Some of the commentary made about Garth have been totally unfair and are not helping the situation.”

“Mr Mulvey said the legal case taken by a resident against all five concerts would be another deterrent for Brooks to come play in Ireland.

“There’s nobody happy, this result pleases nobody. Sometimes I wonder where is the common sense in all this.

“This has attracted an extraordinary amount of adverse publicity in the music industry in the US, which is a massive industry. Our competitors will use this to bring the concerts to their countries.”

It is understood a ship full of Brooks equipment left the port in the US headed for Ireland yesterday but may yet be turned back.