Garda Commissioner to look at involvement in photocall 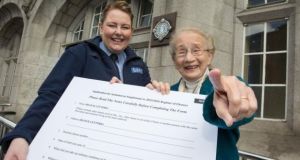 Garda Commissioner Nóirín O’Sullivan said the force is examining the circumstances in which uniformed members were in a voter registration drive for the Yes Equality campaign.

Ms O’Sullivan said it was not appropriate that a uniformed garda was in a photo shoot organised by the Yes campaign in the same-sex marriage referendum.

She said circumstances in which uniformed gardaí were at a stand in University College Cork (UCC) organised by Yes campaigners was also being examined.

Ms O’Sullivan said the garda in the photoshoot outside Pearse Street Garda station on Sunday did so in “good faith” as part of a voter recruitment drive.

“The purpose of gardaí engaging in this is to be sure that people know [they] have to register to be able to vote,” she said. “Members of An Garda Síochána are apolitical and are not supporting either side in this particular referendum or in any campaign.”

When asked if disciplinary action will be taken against the gardaí involved, she said: “It is something that we are looking at at the moment.”

At the launch of a €27 million redevelopment plan for Kevin Street Garda station, Minister for Public Expenditure Brendan Howlin said the photocall was a “mistake”.

“It is very important that An Garda Síochána is not politicised in any way,” he said.

Students at Dundalk Institute of Technology, who had hoped to register to vote in the up-coming referendums, were unable to do so on Monday.

Brian Fitzpatrick, president of Dundalk IT students’ union, said the registration event had been arranged via LGBT organisation Dundalk Outcomers. A Garda presence on campus to register new voters on Monday before the May 5th deadline had been arranged, he said.

No gardaí attended the event, which was to take place for the first four days of this week and had been advertised on social media, Mr Fitzpatrick said.

“Now we have to tell students to go to their local Garda station. Luckily 50 per cent of our students are local.”

No one from Dundalk Garda station was able to comment.

Laura Harmon, president of the Union of Students in Ireland, said that USI recognises the “necessary role of gardaí to verify identities to ensure that people can get registered to vote.

“We are very clear that gardaí have no political role in referenda,” Ms Harmon said.

The union encourages everybody to register to vote and “have their say, regardless of their political stances”.

Ms Harmon said “USI has for many years been extremely grateful to community gardaí for attending on campuses right across the country to verify identities for supplemental registration”.

Keith Mills of Mothers and Fathers Matter said Sunday’s photocall was not an isolated incident.

He accused Yes Equality of a “systematic abuse” of the impartiality of An Garda Síochána. “We need to know from gardaí at what level this was approved of,” he said.

Retired judge Catherine McGuinness, a supporter of the Yes campaign, and a uniformed garda from Pearse Street Garda station posed for a picture on Sunday on the station’s steps.

The photograph was criticised by the No campaigners as being a politicisation of the force.

Independent TD Mattie McGrath accused Yes Equality of being “completely disingenuous” in stating that the gardaí were just involved in a voter-registration drive.

“It is inconceivable that the thought did not cross their mind that this was an abuse of the position of the gardaí,” he said. “It is also stretching credibility to think that a retired judge of Catherine McGuinness’s standing could not have foreseen potential conflicts of interest by taking part in the event where she did and with whom she did.”

Mr McGrath said if the gardaí in uniform had appeared at a No voter registration event there would be a “massive backlash from the Yes campaign”.

“We cannot have the gardaí, an impartial and neutral body drafted in in the same way. We need fairness in this debate, not cheap stunts that do the gardaí and the voters a huge disservice,” he said.

‘Inappropriate’ Photographs have also emerged online of gardaí in Cork taking part in a voter registration event organised by the Yes Equality campaign on Sunday.

The event took place in University College Cork and was organised by the UCC Lesbian, Gay, Bisexual and Transgender (LGBT) community.

Mr Mills said the presence of gardaí at UCC was evidence of the “blatant politicising” by the Yes side of the force.

He said: “We have not had the politicising of the gardaí since the foundation of the State and we shouldn’t have it now just because there is a political consensus among the elite in Ireland about this issue.”

He called on Minister for Justice Frances Fitzgerald to investigate the photocall with the officer. “I am deeply concerned about this. The Minister needs to say something about this. We need to know if this is the actions of an individual guard or something more, and if disciplinary action needs to be taken.”

An Garda Síochána is apolitical and its members are not allowed to campaign on any political issue or be members of a political party.

In 2006 the Garda Representative Association (GRA) was forced to back down when it said it would encourage colleagues, friends and relatives to vote for non-government parties.

The threat was part of a row with the then minister for justice Michael McDowell over the creation of the Garda Reserve.

Mr McDowell reminded them they had taken an oath to be apolitical. The issue caused a rift between then Garda commissioner Noel Conroy and the leadership of the GRA.

Yes Equality has denied that the photocall was an attempt to politicise the force.

Spokesman Tiernan Brady said the point was to highlight that people could register to vote by filling in a form at a Garda station before May 5th.

A previous voter-registration drive by Yes Equality led to 40,000 new voters registering in October. Mr Brady described it as a “civic duty question”.

“This campaign is very clearly just about registering. There will be other days when we can get out and publicise the Yes vote.”