More than 40,000 rail passengers disrupted during three-hour strike on Friday 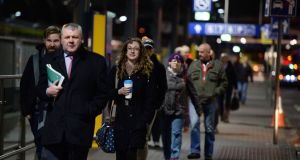 Passengers from Athlone, on a train which departed before 6am, arrive at Hueston Station on Friday. Photograph: Cyril Byrne/The Irish Times 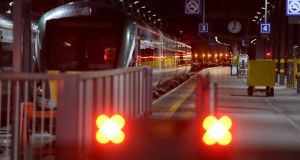 An almost empty Hueston Station at 7am on Friday as services are interrupted by a three-hour strike. Photograph: Cyril Byrne/The Irish Times 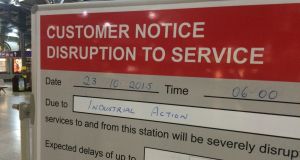 A customer notice at Heuston Station in Dublin explaining the strike action which began at 6am. Photograph: Cyril Byrne/The Irish Times

Trade union Siptu has warned that further strike action on the country’s railways is inevitable unless there is change in approach by management at Iarnród Éireann.

The warning comes after about 40,000 rail passengers were forced to make alternative travel plans on Friday morning due to a strike between 6am and 9am by drivers in a dispute over payment for past productivity.

In a statement on its website Iarnród Éireann said normal service has now been restored.

A second three-hour stoppage is scheduled for Friday November 6th, and further strikes have not been ruled out.

The union urged management at the rail company to engage in advance of a further planned work stoppage by train drivers in a fortnight.

Siptu called on management at the State-owned rail company to “engage constructively with unions on commitments on past productivity it entered into in previous agreements with workers”.

“It is unfortunate that train divers were left with no option but to undertake industrial action today due to the failure of the company to engage in genuine negotiations on its previous commitment to workers in relation to past productivity.

“During talks between workers’ representatives and management over recent days, which were facilitated by the Workplace Relations Commission, unions have engaged in a manner aimed at reaching a just resolution to this dispute.

“However, a similar approach was not evident on the management side. During the talks management representatives released information directly from discussion documents as well as wilfully misleading statements about the impact of scheduled industrial action.”

“The confrontational attitude adopted by management during these talks is part of a wider deterioration in its approach to industrial relations over recent months.

Unless there is a real change in its approach, in particular a willingness to address past productivity in line with the agreement it entered into with trade unions in September 2014, further industrial action is inevitable.

“A threat by management to offset what it claims was the cost the company incurred from today’s industrial action from any proposal it intends to present aimed at concluding this dispute is not constructive to finding an overall settlement. This threat should be withdrawn.”

The strike followed the collapse of talks shortly before midnight at the Workplace Relations Commission with unions blaming Iarnród Éireann for ignoring claims for payment for past productivity and seeking excessive future concessions for the stoppage.

The company claimed unions had rejected proposals which would have delivered increases in earnings for drivers of almost 8 per cent between February next year and January 2018.

In a statement the company said the strike proceeded “despite our best efforts to resolve the issues”.

Productivity proposals were put to trade unions which would have delivered an increase in earnings for drivers of up to 7.9 per cent between February 2016 and January 2018, the statement said.

It said the unions had also sought a shorter working week which would have cost the company an additional €2.75 million and reduced productivity.

Unions have rejected the company’s claims.

General secretary of the NBRU, Dermot O’Leary, said it was unfortunate that it took until the 11th Hour for the real company agenda to emerge.

He claimed the company had they continuously and quite deliberately chose to ignore our members’ agenda in relation to past contributions. This coupled with their excessive expectations in relation to future productivity far exceeded their public position of attending at the WRC to do a deal to prevent disruption to services.

According to Mr O’Leary this approach was designed to “provoke our members to the point where they now feel that they have no option but to engage in industrial action”.

Minister for Transport Paschal Donohoe said he regretted that an agreement could not be reached. He said strike action could only hurt the rail company financially.

Mr Donohoe added the company “had accumulated losses of €135 million”.