Government scheduled to reverse cuts for those earning up to €150,000 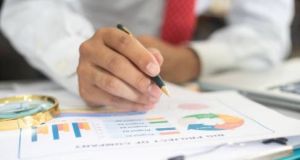 The Department of Public Expenditure told public-service representative bodies it envisaged no pay increases for State employees either nationally or at sectoral level in 2021 under any new agreement. File photograph: Getty

New pay restoration measures due to be made to higher earning public-service personnel in the months ahead will cost €42 million, the Department of Public Expenditure has said.

About 340,000 staff across the public service will receive pay increases of 2 per cent from the beginning of October.

However, in addition the Government is also obliged under legislation to reverse, for higher-earning staff, remaining cuts that were imposed under financial emergency legislation (Fempi) following the last economic crash.

The department said on Wednesday that under legislation the Minister has to “provide for completion of pay restoration to public servants paid an annual basic salary of €150,000 or less on any date between October 2nd, 2020, and July 1st, 2021, inclusive.

“The current estimate of the full-year cost of this measure is approx €42 million.”

The department declined to say when exactly the payments would be made.

Ministers in the current Government, almost since it took up office in June, had signalled they would pay the 2 per cent pay rise due in October to public-service personnel. It is the final payment arising from the current public-service pay deal. However there has been little or no public comment about the other payments as part of the reversal of previous cuts which are due to be made to groups such as senior civil servants, higher-grade staff in health, education and local government as well as politicians.

The Government is holding preliminary talks with various public-service representative bodies about the potential for a new pay deal to succeed the current agreement, which expires at the end of the year.

According to sources who participated in these discussions, the department told public-service representative bodies it envisaged no pay increases for State employees either nationally or at sectoral level in 2021 under any new agreement. However increments would be paid as normal.

Government officials have signalled to these groups that they envisage an accord of shorter duration.

It is understood the department suggested any new deal would be shorter, potentially for two years. This has led to suggestions that any increases could be pencilled in for the second year of any new accord.

However even if there were to be no new increases as part of any new deal in 2021, the Government’s public-service pay bill would still increase by more than €300 million. This would stem from carryover costs from the pay rise to come into effect in October, and other commitments including the reversal of the Fempi cuts for higher earners and initiatives relating to recent public-service entrants and the implementation of some Labour Court recommendations.

Over the next four years, there are pay costs of more than €400 million in total pencilled in to the Government’s public-service pay projections before any wage agreement, or major increase in staffing, is taken into account.

Departmental briefing documents for the Minister for Public Expenditure, Michael McGrath, in June said the gross pay bill would be about €19.7 billion this year.

The briefing material said the public-service pay bill had been increasing by about €1 billion annually over recent years, made up of one-third wage rises and two-thirds staff increases (about 9,500 per year).