French vessel, believed to have been fishing in Irish waters, detained by Naval Service 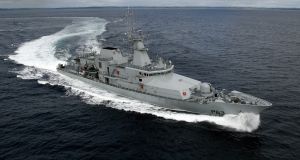 A French boat believed to have been fishing in Irish waters in breach of regulations has been detained by the naval forces and is on route to shore where the crew will be questioned further.

The detention was in relation to “alleged breaches of fishing regulations”, a statement said.

“The vessel is being escorted to Dingle, where it will be handed over to the Garda”.

It is the eleventh time a vessel has been detained by the Naval Service so far this year.

The Defence Forces conducts sea fishery inspections in line with an agreement with the Sea Fishery Protection Authority as part of its delivery of services tor the State.