Dolphin’s cut believed to be caused by propeller of boat in Dingle harbour, Co Kerry 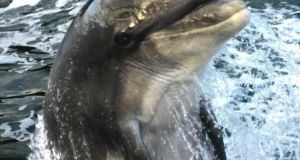 Fungie the Dingle harbour dolphin has sustained a deep blade cut, probably by the propeller of a visiting boat, with a scratch going as far as the dorsal fin.

The cut on the dolphin is deep, wide and red and was spotted yesterday.

The dolphin’s fanpage on Facebook ‘Fungie Forever’ says while Fungie lovers are “gutted” followers should not panic.

It says Fungie after staying quiet and under the water for a while re-emerged to jump and play.

“It looks deep, wide and red but we have seen deeper wounds on other dolphins that healed quite well.”

The much loved dolphin has sustained injuries before, to his chin and has recovered.

“Fungie has always healed well,” his fans are reassured.

Fungie knows the local boats, and the danger of their propeller blades, but he is sometimes attracted to visiting boats.

The bottlenose dolphin first emerged in the harbour around 1983 playing alongside the boats of fishermen returning to Dingle . They named him Fungie.

He has remained in the harbour and he has spawned a whole industry.

Eight Fungie boats operate to carry passengers to see the dolphin and souvenirs, photographs and books crowd the local shops.

A sculpture of the dolphin is at the entrance to the marina.