Reporter remembered as a wordsmith with a charismatic personality 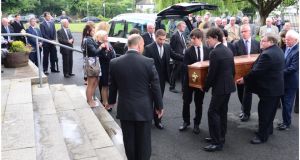 They supported him through the years of his cruel illness, and yesterday morning, at St Gabriel’s Church in Dollymount, the family, friends and colleagues of Colm Murray turned out to support the memory of the late RTÉ sports broadcaster.

Murray died on Monday as a result of motor neuron disease. Chief celebrant of the Mass, Fr Jimmy Murray, told the congregation that he died on his wedding anniversary and on the first day of the Galway races, his favourite meet. In fact, Fr Murray added, he had spent the first half of his honeymoon at the races with his wife Ann.

By the time the funeral Mass began at noon, it seemed as if nobody was left in Montrose to staff RTÉ. Murray’s colleagues from sports and news arrived in their scores from every level of the organisation to pay tribute to one of their own.

Rugby player Brian O’Driscoll represented the sporting world. With the Galway races under way, as is the Goodwood meet in England, jockeys and trainers were notably absent, doing their jobs on the racecourses that Murray loved so much.

The chief mourners were Ann, their daughters Patricia and Kate his sister Mary and a number of in-laws and nieces and nephews.

Fr Murray was joined by nine other priests at the altar. In his homily, he spoke of a life “punctuated with love and kindness”; of a man who was a “great wordsmith” with a “charismatic personality”.

Even when his illness deprived him of speech, “he maintained that lovely smile and he would look at you with a mixture of hope and longing.”

His daughter Patricia was among those who read prayers of the faithful.

The eulogy was given by his other daughter, Kate, who stated simply that “his illness broke our hearts”.

Kate spoke of a father who was “warm, kind, generous and so loving”. She paid tribute to the homecare team from St Francis’s Hospice, Raheny, the carers who worked with them over the years, the public who sent “thousands of messages from all over the country”, and “the extraordinary kindness, humanity and decency shown to Dad by everyone in RTÉ at every level.”

Her most special thanks, on behalf of herself and her sister, were to their mother, Ann. “Her courage, strength and love for my Dad, especially in the last three years, is what got us through, and it’s what got him through,” she told the congregation, who applauded loudly.