Full report on Anglo trial collapse may never be made public 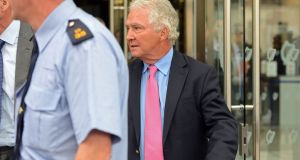 The full reasons why the trial of former Anglo Irish Bank chairman Seán FitzPatrick collapsed may never be made public after a State watchdog decided to withhold a lengthy report on the case.

Director of Corporate Enforcement Ian Drennan has withdrawn his offer to provide a 415-page report on the case to an Oireachtas committee because it could not give him guarantees he wanted to legally protect him and his office from “litigation risk and associated financial exposure”.

Mr Drennan offered the report to the Joint Oireachtas Committee on Business, Enterprise and Innovation to help it understand why the trial collapsed as part of its scrutiny of new legislation strengthening its powers.

He had warned about the risk and cost of litigation from individuals named in the report and engaged in lengthy correspondence with the committee in recent weeks seeking legal immunity.

The watchdog told the committee last month he was “at a loss” about why they could not give written guarantees on assurances he said he received verbally.

On Friday he wrote to the committee chairwoman, Fianna Fáil TD Mary Butler, withdrawing the offer of the report. “I am disappointed that we cannot find a mutually satisfactory way forward,” she said.

It would not be possible to receive “absolute privilege” from any committee, she said. She now did not expect the committee to see the report.

“I respect Ian Drennan’s decision and the concerns he raised but I have to work within the parameters set by the Office of the Parliamentary Legal Adviser and protect the committee and its members. My hands are tried,” she said.

A spokesman for the Office of the Director of Corporate Enforcement (ODCE) declined to comment.

Mr FitzPatrick was accused of providing false information to Anglo Irish Bank auditors Ernst & Young, now EY, over his loans at the bank.

His first trial collapsed in 2015 after the ODCE’s then legal adviser Kevin O’Connell admitted shredding relevant papers in the case in a “panic”. A follow-up retrial ended in 2017 after the judge directed Mr FitzPatrick to be acquitted over the ODCE’s coaching of witnesses and contamination of evidence.

Ms Butler said the committee would meet next Tuesday to discuss whether Mr O’Connell would still want to testify before it. He offered to appear but only after it read Mr Drennan’s report.

Mr Drennan has said that factors behind the trial’s collapse extend “well beyond” the failures at the ODCE.