From the International Space Station to Ryanair

Cmdr Chris Hadfield arrives in Dublin to promote his autobiography 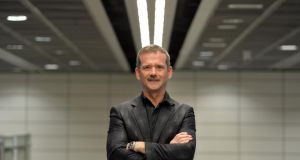 He may have travelled nine million kilometres as the commander of the International Space Station, but Cmdr Chris Hadfield arrived in Ireland by more traditional means.

He took a Ryanair flight from East Midlands to Dublin Airport this evening following a hectic book promotion tour in the UK.

His autobiography An Astronaut’s Guide to Life has just been released in Ireland and the UK.

He said reaction to his autobiography in his native Canada has been “phenomenal” and the book has sold 300,000 copies to date.

It is the first time he has been back in Ireland since his return from space in May after six months on board the ISS.

His particular fascination with Ireland is partially cultural, because of his interest in Irish music, and partially because Ireland is right in the path of the ISS’s orbit.

He is in Ireland for a hectic round of engagements which include an appearance on the Late Late Show this evening, a duet with The Chieftains on Moondance tomorrow on Earth (they’ve already done one in space), interviews with Newstalk and RTÉ Radio One and a book signing in Eason’s tomorrow at midday.

On St Patrick’s Day he wore a green dicky-bow and sang Danny Boy, his favourite song.

He said it was his wife who packed the dicky-bow and it was delivered to the ISS via a robot spacecraft.

“As commander I have to look ahead to every holiday. That was a cooperative effort between my wife and I. Each robotic ship has a little package of stuff, a small satchel for yourself. I told her to pack something for St Patrick’s Day, but I wasn’t sure what it was going to be. What she sent was perfect.”

Cmdr Hadfield said he was aware of the interest in Ireland in his time in space through Twitter. “Twitter’s two way. I could hear and see what people were saying. So many people were responding and sending their best wishes.”

He said it was his son Evan’s idea to tweet as gaeilege which he did in February this year famously writing “Tá Éire fíorálainn - land of green hills dark beer. With Dublin glowing in the night.”

“I wanted to be respectful and careful. I asked him to look it and make sure that it was just right,” he said. “By no means can I speak Irish. It is not often that anybody is going to be tweeting in Irish from space, maybe not ever.”

Cmdr Hadfield has retired since returning to Earth, something he said he always intended to do.

He said returning to Earth has been hard physically for him. “Your body really enjoys being weightless. When you get back to Earth it really pays the price for literally not lifting a finger in zero gravity.

“Even your tongue feels heavy in Earth. I’d forgotten that your tongue and lips have weight. It’s like talking and standing on your head.”

He claimed to have been astounded at the success of his Space Oddity video which he did from space with help from his son Evan. It has been viewed hundreds of millions of time on various different media. “Not bad for a weekend project with my son,” he said.

Cmdr Hadfield is appearing on the Late Late Show tonight and met with daughter Kristin, who is a PhD student in psychology studying in Trinity College Dublin beforehand.

He will also be doing a live interview on Newstalk tomorrow morning from the Science Gallery, a rendition of Moondance with The Chieftains and a book signing in Eason’s at 12pm.