From its inception, Luas tramway welcomed by Dubliners 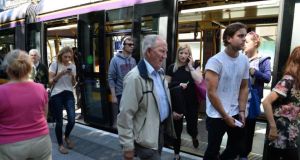 Customers using the Luas yesterday on the 10th anniversary of its launch, alight at the St Stephen’s Green Luas stop in Dublin. Photograph: Dara Mac Dónaill/ The Irish Times

Bringing back the trams was the trendy thing to do in the early 1990s. New tramways were already running in the French cities of Grenoble, Nantes and Strasbourg, and many more were being planned. Even Manchester was getting one. It was the urban transport solution du jour.

After plans for what became known as Luas were put forward by consultants Steer Davies Gleave for the Dublin Transport Initiative, there was almost immediate public acceptance. The only real worry people had was that the power lines would detract from the streetscape.

A three-branch network was proposed, linking Ballymun, Dundrum and Tallaght with the city centre. For cost reasons, one line had to be dropped and the axe fell on Ballymun – fewer people on the route had cars, so the benefits of Luas in promoting a switch to public transport were more marginal.

What Dublin was to get then was a boomerang-shaped line running from Tallaght to Dundrum (later extended to Sandyford), via St Stephen’s Green, College Green and Lower O’Connell Street. In Dublin, however, being a “centre of paralysis” as James Joyce correctly diagnosed it, there had to be a “review”.

In May 1998, the then Fianna Fáil-Progressive Democrats coalition – egged on by Fine Gael’s Garret FitzGerald – spurned the idea of running trams up and down Dawson Street. Minister for transport Mary O’Rourke then produced a crude diagram showing the Luas line running underground in the city centre.

The project then proceeded on the basis of two independent lines – dubbed Luas by then chief executive of CIÉ Michael McDonnell – each with its own depot, at the Red Cow interchange and Sandyford Industrial Estate. No other city in Europe would have contemplated such an outcome.

By then, the Luas project had been taken over by the Railway Procurement Agency (RPA), which was set up in 2001 to deliver rail projects and supervise their operation. The Green Line to Sandyford, most- ly laid on the former Harcourt Street railway line, was the first to start in August 2004.

The new trams were an instant success. Figures were produced that commuters were switching to Luas in large numbers, but on closer examination, many of them had previously been using buses; the trams were a cut above Dublin Bus.

After the Red Line to Tallaght opened in October 2004, passenger numbers on Luas rose steadily to 83,500 a day. Extensions were built to Saggart and Bride’s Glen, with much of the cost being met by development levies or direct contributions from developers with land along the 36.5km “system”.

The Luas compares with an average of 315,000-plus passengers a day using Dublin Bus services. The comparable figures for Dart and Dublin suburban rail services are 43,100 and 27,200 a day, respectively.

However, instead of building more Luas lines, the RPA invested much of its energy and resources in pursuing the Metro North and Metro West projects.

They were both misnomers as they were to have the same type of vehicles as Luas trams, able to run underground for long distances.

Both “metro” projects have since been pigeonholed on cost grounds and now the RPA is building Luas Cross City, which will extend the Green Line through the city centre – as originally envisaged in the mid-1990s – extending northwards to Cabra, where it will link with the Maynooth line.

The focus of the National Transport Authority has shifted to bus rapid transit, with proposals for busways to link Blanchardstown, UCD Belfield, Clongriffin and Swords with the city centre, which would be more cost-effective than more Luas lines.