14 of the 1916 executions took place in Kilmainham Gaol. We look at the cell in which Patrick Pearse spent his last night and retrace his steps to the stonebreakers yard where he faced a firing squad at dawn on May 3rd 1916. Video: Bryan O'Brien

Commemoration events have taken place in the Stonebreakers’ Yard in Kilmainham Gaol to mark 100 years since the start of the executions of the leaders of the Easter Rising. Video: Ronan McGreevy 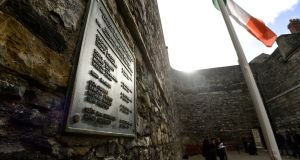 Four leaders of the Easter Rising were remembered at Kilmainham Goal 100 years to the day after their execution.

Joseph Mary Plunkett, a signatory to the Proclamation, Edward Daly, Michael O’Hanrahan and Willie Pearse, the brother of Patrick, were all executed on May 4th, 1916.

Each of the 15 men executed after the Rising following courts-martials are being remembered in State ceremonies with full military honours on the exact centenary of their deaths.

Minister for Children James Reilly and Minister for Communications Alex White laid wreaths on behalf of the Government.

Mr Reilly recalled the marriage of Plunkett to Grace Gifford on the night before his execution. Stephen Count Plunkett, a grand-nephew of Joseph Mary, laid a wreath on behalf of the family.

Stephen Plunkett’s grandfather George was also involved in the Rising and was sentenced to death but his sentence was commuted. Stephen said the manner of the commemorations had shown that Ireland had “grown up” as his family were anti-Treaty and had been ostracised in the new State.

He also mentioned that he had relatives in the British army from that period and that they deserved to be remembered too.

A wreath was laid on behalf of the Daly family by his 87-year-old niece Mairead de hOir. Her mother Nora was Edward Daly’s sister. She recalled her mother’s devastation at the death of Ned, as he was known, as they were next to each other in age.

The author Helen Litton, a grand niece of Edward Daly who also laid a wreath, criticised the absence of anybody from the Clarke family at the commemoration service.

The Clarkes and Daly are related by marriage as Tom Clarke married Kathleen Daly who was another of Edward Daly’s sister.

No Clarke relative has attended any of the commemorations though Tom Clarke has two grandsons in England.

As a result and because of the clash with the opening of the renamed Tom Clarke Bridge, there was no relative present at the Clarke commemoration service in Kilmainham Gaol on Tuesday.

Ms Litton, who is also Tom Clarke’s biographer, said: “All of these centenary commemorations have been tremendous for the families. The Clarkes are not doing anything. Why aren’t they doing anything? They have every right not to, of course, but it is a pity that have not engaged.”

Several members of Michael O’Hanrahan’s family attended the service. Margaret O’Hanrahan Coyle, a grand-niece of Michael, spoke of her pride at laying a wreath on behalf of her family. “I found today to be extremely emotional,” she said.

A large number of Pearse family members attended the commemoration service for Willie Pearse, the brother of Patrick. A wreath was laid by Rhona Reddington, a great-grand niece of the Pearse brothers. “To think of what those men and women did for this country was wonderful. It was a privilege to be able to do this on behalf of the family,” Ms Reddington said.

The commemorations continue with Major John McBride on Thursday morning.