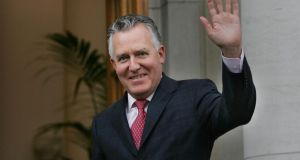 Peter Hain: “I think there should be an end to all conflict-related prosecutions.” Photograph: Brenda Fitzsimons


DUP Minister for Enterprise Arlene Foster has described as a “grubby distraction” a call by the former Labour northern secretary Peter Hain for an end to prosecutions for all Troubles-related killings.

Mr Hain, who has defended the scheme guaranteeing non-prosecution for so called “on-the-runs” or “OTRs”, called for a de facto amnesty for people who were involved in Troubles killings up to April 1998.

“I think there should be an end to all conflict-related prosecutions,” he told the London Times .

“That should apply to cases pre-dating the Good Friday Agreement in 1998. This is not desirable in a normal situation. You would never dream of doing this in England, Scotland and Wales, but the Troubles were never normal,” he added.

Mr Hain said he realised that his proposal would make victims and survivors “desperately angry” but contended it was necessary for Northern Ireland to stop being “stalked” by its past.

Both Sir Hugh Orde and Mr Woodward are likely to face questioning on a claim last week by former Det Chief Supt Norman Baxter that the Northern Ireland Office favoured a culture of not prosecuting republicans.

Mr Hain said his non-prosecution call should apply to former British soldiers as well as to republican and loyalist paramilitaries.

Ms Foster, however, was dismissive of his proposal. She suspected these comments were to “distract from the OTR deal struck between Sinn Féin and the Labour government of which Mr Hain was a part”.

“Many people, like me, opposed the Belfast Agreement because it stood the rule of law on its head in releasing convicted terrorist criminals. Whilst the odds of securing convictions for the atrocities which blighted Northern Ireland are low, and the perpetrator would serve no more than two years in prison, there is still some hope for families that they might see some justice served,” she added.

“Previous calls for an amnesty have rightly been rejected out of hand by all right thinking people and that should be the case with this latest intervention from Peter Hain,” said Ms Foster.