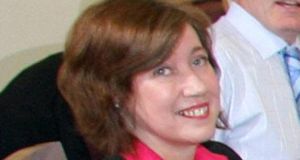 Rosalie Flanagan in 2007. She is a former permanent secretary to the North’s Department of Culture, Arts and Leisure. File photograph: Paul Faith/PA Wire

Rosalie Flanagan, a former senior Northern Ireland civil servant, has been appointed to the commission charged with finding the bodies of the Disappeared.

On Wednesday, Ms Flanagan was announced as the new UK head of the Independent Commission for the Location of Victims’ Remains, joining its Irish Government head, Tim Dalton.

The commission was formed by the British and Irish governments in 1999 to find the bodies of people who were abducted, murdered and secretly buried during the Troubles, chiefly by the IRA.

Ms Flanagan is former permanent secretary to the North’s Department of Culture, Arts and Leisure who worked at the heart of the Northern Executive. She also was a member of the independent panel set up in 2015 that examined the extent of paramilitary activity in Northern Ireland.

The appointment was welcomed by Mr Dalton, Minister for Justice Helen McEntee and by the commission’s lead investigator Geoff Knupfer.

Of the 17 Disappeared, there are now three remaining bodies to be discovered: those of IRA victims, Columba McVeigh from Donaghmore, Co Tyrone, who went missing in 1975; Joe Lynskey, who went missing from Belfast in 1972; and British soldier Capt Robert Nairac, who was shot dead close to the Louth/south Armagh Border area in 1977.

The commission in announcing the appointment of Ms Flanagan again appealed for public assistance in trying to find the remaining Disappeared.

Residence doused in petrol during Cork burglary 00:39
Health insurance matters – even in the days of premium refunds 00:00
Dublin hospital gave leftover vaccines to 16 relatives of staff 22:33
'Consider your choices, make the right ones': Thirteen more Covid-19 deaths, 2,944 cases 22:22
Women and children in mother and baby homes ‘abandoned by church’ 22:02