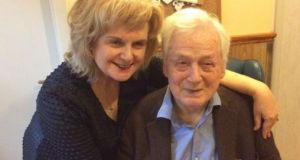 Áine Ryan with her father, George Ryan, who died on Tuesday aged 89

The death has taken place of the former Irish Times Bridge columnist and author, George Ryan (89).

A former primary school teacher, he wrote the Irish bestsellers Bones of Bridge and Some of the Flesh, which remain invaluable reading for students of Bridge.

While at The Irish Times he also wrote a number of humorous columns and was described by the late Irish Press sports journalist Con Houlihan as “probably the funniest man at large in Ireland”.

Mr Ryan also self-published books including No Time for Work, which, over time and reprints, was expanded to incorporate several of his other books.

The self-published tales were told through the eyes of an assistant teacher who had “an inordinate fondness for drink” but survived “14 headmasters, 17 parish priests and 28 department inspectors” before he “found himself without a job”.

Galway bookshop owner Des Kenny listed Ryan in his own compilation, Kenny’s Choice: 101 Irish Books You Must Read, and classified him as an unrecognised self-publishing phenomenon. “We could never sell enough of him, and even after his last reprint in 2008, the books sold out in weeks,” he said.

Mr Ryan delivered his last bridge column in 2014 before ultimately moving to the Pilgrim’s Rest Nursing Home in Westport, Co Mayo, to be close to his daughter, the journalist Áine Ryan and his son Gearóid Ó Riain.

Ms Ryan recently wrote a series of articles for The Irish Times, entitled Daddy, dementia and me, which are still accessible online.

Mr Ryan died peacefully in the Pilgrim’s Rest Nursing Home on Tuesday. He was pre-deceased by his son Dermot, first wife, Mary, and second wife, Joan. He is survived by his sister, Sr Clare Ryan SSL and by daughters Áine, Breda, Clare and Eithne and son Gearóid.