Charities urged to be honest beyond necessity 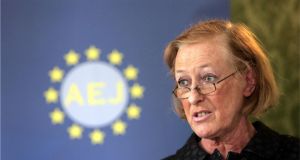 Former editor of The Irish Times Geraldine Kennedy: “I have never witnessed such a scale of disillusionment with politics. I would go so far as to say that there is even a lack of belief among politicians themselves in what they do.”

Former editor of The Irish Times Geraldine Kennedy said yesterday she had never before seen such a breakdown in trust in traditional institutions.

“I have never witnessed such a scale of disillusionment with politics. I would go so far as to say that there is even a lack of belief among politicians themselves in what they do,” she said. “That is disturbing. It is also damaging to democracy . . . I have never either seen such a disillusionment and disenchantment with the Catholic Church. It is far more dramatic than the lack of trust in politics.”

But, Ms Kennedy said, the final straw for many people was the breach of trust with the banks. “They contributed to the loss of Ireland’s economic sovereignty, a massive psychological and historical development for an independent nation.”

On the phone-hacking trial in the UK, “if the allegations are only half true, it would make you ashamed to be a journalist. I’d be particularly ashamed because, having become the first woman editor of an English-speaking daily newspaper, she [Rebekah Brooks] was, apparently, the second.”

Ms Kennedy said the arms crisis and the events that flowed from it marked the start of the breach of trust with politics. The common denominator in the betrayal by the institutions was “they believed they could behave with impunity. They could get away with it and nobody would have the temerity to challenge or question them . . . somewhere along the line a moral compass has been lost.”

She said Pope Francis had grasped this reality immediately upon his accession and “let us hope that the vested interests and the forces of darkness that would hold back the Catholic Church do not succeed in thwarting his endeavours”.

Ms Kennedy was speaking at a conference organised by ICTR, the representative body for Irish charities. She said principles such as trust, accountability, transparency affected Irish charities possibly more than any other sector in society. “In order to donate, people must believe in you.”