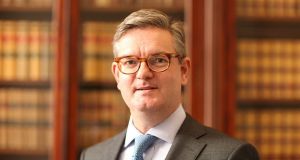 Former British ambassador to Ireland, Sir Julian King, who served in Dublin during Queen Elizabeth’s visit in 2011, has been appointed as the United Kingdom’s European commissioner.

Now serving as ambassador in Paris, Sir Julian’s appointment is subject to approval by MEPs. He will fill the vacancy left when former commissioner Lord Hill of Oareford resigned after last month’s Brexit referendum.

A career diplomat, the 51-year-old took up his posting in Paris in February this year, having previously served in Dublin from 2009 to 2011 and later as director general of the Northern Ireland Office.

He spent five years in Brussels from 2004 to 2009, first as part of the UK representation to the European Union and then as chief of staff in the office of the British commissioner.

Prime minister David Cameron’s spokesman said: “Sir Julian King is an experienced diplomat. He has got particular expertise in European affairs and the prime minister thinks he will make a strong addition to the commission.”