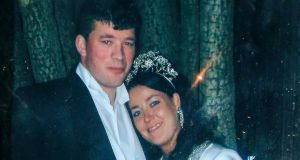 Thomas and Sylvia Connors were among the 10 people who died in the halting site fire at Carrickmines.

The Taoiseach Enda Kenny has requested that flags at Government Buildings be flown at half-mast for the funerals of 10 people who died during a fire at a halting site in Carrickmines over the weekend.

Ten people from two families died in the blaze at the Glenamuck Road halting site near the M50 motorway in the early hours of Saturday morning. Five of the dead are children under 10, including a six-month old baby.

Among the first of those to offer public condolences was President Michael D Higgins, who said he had been “shocked and saddened” by the tragedy.

Tánaiste Joan Burton said her thoughts were with those affected as they mourned the loss of their loved ones.

“I would like to express my deepest sympathies with the families of those who tragically lost their lives. I wish those injured the very best with their recovery,” she said.

The dead and injured were prayed for at Masses over weekend after the Archbishop of Dublin Diarmuid Martin asked that they and their families be remembered.

Uefa held a minute’s silence ahead of the European Championship qualifying game between Poland and the Republic of Ireland in Stadion Narodowy last night for the victims of the fire as well as those who died in the bomb attacks in Ankara.

The Football Association of Ireland also extended its sympathies to the families and friends of the victims in both tragedies.

The Irish Traveller Movement is also to open a book of condolences in Dublin today. Its location will be available on its Facebook page.

Geraldine Dunne, director of the group conveyed “sincere thanks to the many people locally and nationally who have contacted us and have shown remarkable kindness with offers of help and support” in the wake of the tragedy.

Pavee Point extended its sympathies to the families and extended families of the victims.

Co-director of the organisation Ronnie Fay commended the fire service members “who put their lives on the line in trying to rescue people from the blaze”.

Appeals for donations to support the victims and their families have been launched by both St Vincent De Paul and Traveller support networks.

“I think everybody in the country’s hearts would just go out to the families; young children involved. It’s just so dreadfully sad.”

Fianna Fáil leader Micheál Martin said: “This is an extremely shocking incident and I want to express my deepest sympathy to the families affected by this tragedy.”

Sinn Féin president Gerry Adams described the death of so many individuals in a single incident as “horrific news” adding that his thoughts were with those who had been bereaved.