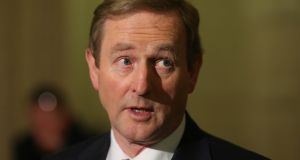 Taoiseach Enda Kenny said on Friday the Goverment does not have an endless pot of money and remained committed to implementing the Lansdowne Road public sector pay deal. Photograph: PA

The Government is facing follow-on pay claims from at least four of the country’s largest trade unions representing nurses and public service employees in the wake of pay proposals made to gardaí last night to avert a threatened strike.

Siptu, INMO, CPSU,Impact and Unite are all seeking an immediate discussion with the Irish Congress of Trade Unions (Ictu) in relation to its support for the Lansdowne Road pay agreement.

However, Taoiseach Enda Kenny has insisted the Lansdowne Road agreement will be implemented by the Government.

Welcoming the decision of the Garda Representative Association (GRA) and the Association of Garda Sergeants and Inspectors (AGSI) to postpone their strike, Mr Kenny said the Government would reflect on the Labour Court recommendation.

Asked about the potential for other unions to insist on further pay increases the Taoiseach said the Government “does not have an endless pot of money”.

Mr Kenny confirmed he had met Tánaiste Frances Fitzgerald and the Minister for Public Expenditure and Reform Paschal Donohoe on Monday to discuss contingency plans but insisted martial law was never an option.

All but one of Ictu’s constituent unions - the secondary teachers’ union ASTI- have signed up to the accord.

The Lansdowne Road deal provides for €290 million in public sector pay rises in 2017 and most unions have signed up to it.

The two Garda representative bodies, the GRA and the AGSI, had declined to sign up to the pay deal.

The Government’s spending plans for 2017 do not include provision for the cost of agreements with unions outside Lansdowne Road.

Last night the GRA and the AGSI deferred a planned 24-hour strike following recommendations on pay issued by the Labour Court; these are expected to be accepted by the Government.

The recommendation include the reinstatement of a rent allowance, a new “on parade” payment and an allowance to reflect the fact gardaí cannot always take annual leave at set times due to operational requirements.

Gardaí had threatened to strike on each of the four Fridays in November.

Eoin Ronayne, general secretary of the CPSU, which represents lower-paid staff in the civil service, said he had written to the public services committee of congress seeking an immediate meeting on the issue.

Scale of the flexibility

Mr Ronayne said he was urging the public services committee to reassess its position on the Lansdowne Road deal in the light of the disputes involving gardaí and second-level teachers.

Mr Ronayne said there would now be pressure from his members - some of whom worked alongside gardaí - for similar pay increases.

He said the deal offered to gardaí showed the scale of the flexibility that existed as part of the Lansdowne Road framework.

Mr Doran told RTE’s Today with Sean O’Rourke show “there is no point pretending that the last 48 hours doesn’t materially alter things. It changes everything”.

Mr Doran said the time frame of the Lansdowne Road Agreement was now untenable. “That game is up, the sooner the Government comes to the table and renegotiates the better.

“The government now has to make immediate arrangements for all the public service,” urged Mr Harbor.

“They have to make a choice - do they deal with disputes one by one or do they want to have an ordered public service pay policy.”

Dara Calleary, the Fianna Fáil spokesman on public expenditure and reform, said is “now looks inevitable” that talks on a successor to the Lansdowne Road Agreement, due to expire in September 2018, must be brought forward.

“The parameters of the Lansdowne Road Agreement must be maintained. However, it now looks inevitable that negotiations on a potential successor agreement may have to start much earlier than previously envisaged,” Mr Calleary said.

“While the expected cost of this pay agreement between the Government, the GRA and the AGSI will not put too much strain on the public exchequer, the possible knock on effects are of great concern to Fianna Fáil.

“Already, we have heard from other public sector unions looking for similar type agreements for their members. It is important that common sense and calm heads prevail as the Government may indeed be in danger of providing for a perfect storm of pay demand and industrial unrest.”

He said the public sector pay commission must immediately meet all trade unions to hear their concerns and grievances.

“Global investors are looking at Ireland right now. We must be confident in our management of public sector pay agreements. With the looming multiple threats from Brexit, now more than ever, the Government needs to get a handle on the issue of public pay, and project Ireland’s budgetary stability.”

What is the Lansdowne Road agreement?

The Lansdowne Road agreement, negotiated in May 2015, began the process of reversing pay and pension cuts introduced for staff in the public service since 2008.

It is scheduled to run until the autumn of 2018 and will cost in total about €900 million. Under the deal, most public service staff are to receive €2,000 in increased earnings in phases between January 2016 and September 2017.

This is to come about through a combination of flat-rate adjustments to the public service pension levy and a partial reversal of pay cuts introduced in 2010.

The Tánaiste and Minister for Justice, Frances Fitzgerald TD, and the Minister for Public Expenditure and Reform, Paschal Donohoe TD, commenting on the recommendation issued last night by the Labour Court in respect of the Garda Associations, reiterated the Government’s long-standing respect for the rulings of the Labour Court as the independent industrial relations body of last resort in the state.

The Ministers welcomed the fact that the recommendation of the Labour Court last night led to the decision not to proceed with industrial action today and that members of AGSI and the GRA are reporting for duty as normal.

The outcome of the process, which should of course, be fully respected, is now being examined in detail by all sides and it is hoped that it will form the basis for a final resolution of this dispute following the balloting of members of AGSI and the GRA in due course.

The Ministers also restated their support for the Lansdowne Road Agreement as the centrepiece of public pay policy noting that the Labour Court’s recommendation was explicitly made within that framework.

The cost of the proposed settlement will be met within existing budgetary allocations.

The Ministers also noted that the Public Service Pay Commission, which has recently been established and the work of which is getting underway, will provide a valuable input about the future development of public pay policy.