Taoiseach to reveal intentions, Bank of America jobs and woman at centre of McCabe case speaks out 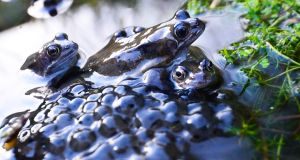 That time of year as frogs create spawn in a pond to herald Spring time. Photograph: Cyril Byrne/The Irish Times

Enda Kenny will break his silence on his future as Taoiseach and Fine Gael leader at a crucial party meeting on Wednesday in the knowledge that the prospect of an immediate challenge to his leadership has receded.

In a short statement yesterday, the Taoiseach confirmed he will address the issue at the Fine Gael parliamentary party meeting.

He said he would make no other comment on the issue until then. Mr Kenny has only once referred to his own future since his admission that a conversation he said he held with Katherine Zappone over false sexual allegations made against Garda whistleblower Maurice McCabe had not taken place

The operation of drink-driving checkpoints across the State is being audited after it emerged that the number of breath tests recorded on the Garda Pulse system appears significantly higher than the number of motorists tested.

The audit began after the Medical Bureau of Road Safety in 2015 noticed a significant discrepancy in the number of disposable mouth pieces for breath test screening devices being ordered by gardaí compared to the number of breath tests being recorded on Pulse.

The discrepancy prompted a detailed examination of breath test data and procedures in the Cork and Kerry Garda regions and an analysis of screening devices into which a driver blows during a roadside test.

Sports injuries accounted for one in three visits to the Health Service Executive’s network of minor injury units last year, according to new figures.

Some 34 per cent of those attending – or about 33,000 people a year – suffered cuts, sprain, broken bones or other injuries playing sport, the survey of patients by the HSE indicates. Thirty per cent said their injury occurred at home while the remaining 36 per cent of cases involved injuries sustained at work or outside.

The units are equipped to perform X-rays, apply plaster casts and stitch wounds. Laboratory and physiotherapy services are also available.

4. Bank of America planning to add 100 jobs to Irish operations

Bank of America Merrill Lynch is planning to add 100 jobs in Ireland as it seeks to expand its global technology and operations hub in Dublin.

Executives from the US banking giant briefed Government officials on the matter last week, according to sources. The move would increase the group’s Irish-based staff numbers by 17 per cent to over 700. A final decision has not yet been made.

Bank of America’s Irish operation – it has offices in Leopardstown and Hatch Street in central Dublin – has been headed by Peter Keegan since late 2009.

5. ‘When can I can get on with my life?’– woman at centre of McCabe case

Eleven years after she made an allegation of sexual assault against Garda whistleblower Sergeant Maurice McCabe, the woman whose complaint is at the centre of an alleged smear campaign wonders when she can begin the rest of her life.

In 2006, she made an allegation of sexual assault against the Cavan-based garda, which was investigated by the Garda. A file was sent to the Director of Public Prosecutions, who decided that no further action was necessary.

Struggling with anxiety, depression and other issues in 2013, she was encouraged by her mother to speak to a Health Service Executive (HSE) counsellor, where she spoke about the original allegation but only, she says, when she was asked to do so.

“When she was taking it down, she said something – I don’t know her exact words; she said she’ll have to refer this on,” the woman said. “I remember straight away it got my back up. I was thinking: ‘Refer what on? This has been reported, this has been investigated and the DPP said insufficient evidence. That’s that, there’s nothing going to change, I have accepted that.’

“I remember coming out of the counselling session and I was more annoyed than when I went in; I remember thinking: ‘Stirring up shit for what?’ I knew by her she was going to report it whether I wanted to or not,” the woman said.