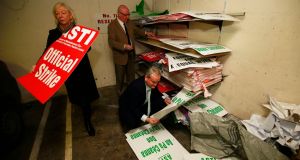 The Government appears determined to hold a firm line in the face of industrial action by secondary teachers, but seems ready to adopt a more conciliatory stance towards gardaí and doctors who are also pursuing pay claims.

A total of 507 schools in the Republic will be closed on Thursday as members of the Association of Secondary Teachers Ireland (ASTI) stage the first in a series of stoppages over lower pay rates for recently recruited staff.

2. Pat Hickey’s lawyers apply for return of his passport

Lawyers acting for Pat Hickey, who is facing ticket-touting charges in Rio de Janeiro following his arrest at the Olympic Games last August, have lodged an application for the return of his passport, in a move which could see him return to Ireland shortly.

Mr Hickey (71) stood down temporarily from his position as president of the Olympic Council of Ireland (OCI) shortly after his arrest.

Although he was released from prison in Rio after 11 days, the authorities retained his passport.

The emails of Hillary Clinton’s presidential campaign chairman have appeared in the latest tranche published on anti-secrecy website Wikileaks.

They touch on activities of the New York consultancy Teneo, co-founded by Mr Kelly.

4. The Mormon ex-CIA man set to upset Clinton and Trump in Utah

The city of Provo in Utah is emerging as the setting for one of the most remarkable subplots of the presidential election campaign.

This is the hometown and political base of Evan McMullin, a little-known former CIA operative and political adviser whose last-minute campaign for the presidency has picked up such momentum that some polls give him a fighting chance of defeating Donald Trump in Utah, one of the safest Republican states in the country.

In a tight national contest between Trump and Hillary Clinton, a McMullin win here could even theoretically deprive both front-runners of the 270 electoral votes they need, thereby requiring Congress to choose between the top three candidates, including McMullin. (It’s a remote possibility: the data journalism site FiveThirtyEight puts McMullin’s odds of winning the White House at 0.4 per cent.)

Canadian prime minister Justin Trudeau has cancelled his visit to Brussels after intra-governmental talks in Belgium on the EU-Canada trade deal ended without agreement late on Wednesday night.

Mr Trudeau had been expected to sign a landmark comprehensive economic and trade agreement (ceta) between the EU and Canada but French-speaking regions of Belgium have blocked the deal.

A spokesman for the international trade minister Chrystia Freeland said Mr Trudeau would not travel as planned, adding “Canada remains ready to sign this important agreement when Europe is ready.”