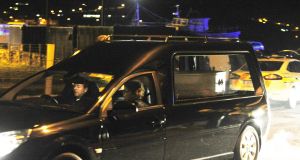 A coffin carrying the body of a child is taken from the scene at Buncrana, Co Donegal. Photograph: Trevor McBride 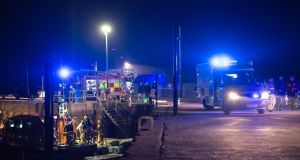 The scene at Buncrana Pier where five died after a car went into the water. Photograph: Justin MacLochlainn 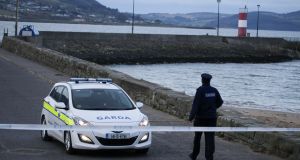 A garda at the scene at Buncrana, Co Donegal. Photograph: Trevor McBride

Five people believed to be from one family, including at least two children, have died in Buncrana, Co Donegal on Sunday night after an SUV left a pier in the town.

It is understood six people, including three children, were in an Audi Q7 when it went into the water at Buncrana Pier at about 7.30pm.

A major air and sea search was mounted and the bodies of two adults and three children of primary school age were recovered.

A sixth person travelling in the vehicle, a baby, was rescued by a bystander from the water after the incident and taken to nearby Letterkenny Hospital for emergency treatment. The baby is currently in a stable condition.

The child, thought to be just months old, was handed or thrown out of a window as the car careered into the water.

Witnesses said the vehicle, a Northern Ireland registered Audi Q7, may have been attempting to turn on the pier when it fell into the water.

The exact circumstances of how the car ended up in Lough Swilly have not been established but it is believed the slipway may have been covered in algae or slippery, or the vehicle was accidentally driven off the pier.

Witnesses have described the scenes as chaotic.

Two lifeboats from Lough Swilly and Greencastle, a helicopter from Sligo, gardaí, ambulances, the fire brigade and local fishing boats were all involved in the rescue mission which lasted for several hours.

Emergency services said they had recovered the bodies of a two boys, a man and a woman. The age of a second female fatality has not been confirmed. The victims have not been named.

Garda sources said while the inquiry into the five deaths was in its early stages, it appears the vehicle may have accidentally reversed off the pier.

However, the same sources stressed that it would take time to piece together precisely how the car entered the water. Postmortems on the remains of the dead were expected to begin at Letterkenny General Hospital on Monday.

CCTV footage from the surrounding area and statements from those who witnessed the incident were being gathered in the town tonight.

Gardaí were trying to establish if the family was from Northern Ireland.

Local Sinn Féin councillor Jack Murray said people were numb after the incident which reminded many of a car crash in the Inishowen area in 2010 in which eight people were killed.

“I was in my house and I began to hear sirens a lot of activity. The texts messages started to go off and I came down to the pier,” he said.

“Our thoughts and prayers are with this family at this time and their relatives. It’s just awful.”

The scene where the incident occurred remains sealed off and was expected to remain closed for several days as gardaí carry out a technical examination.

The pier is a popular attraction for tourists and locals and it is believed the family may have stopped to admire the sunset.

There has been an outpouring of grief on social media. Northern Ireland’s Deputy First Minister Martin McGuinness was among those who expressed sadness at the tragedy.

He said: “My thoughts and prayers are with all of those affected by the devastating tragedy unfolding in Buncrana this evening.

“Our thoughts and appreciation must also be with the emergency services who have had to deal with this tragic situation.” SDLP leader Colum Eastwood described the news as “heartbreaking”.