Fitzgerald plays down any Garda-PSNI differences on IRA 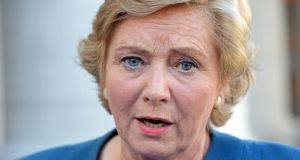 Minister for Justice Frances Fitzgerald told The Irish Times: “There is no difference in fact when you look at what the Chief Constable said and what the Garda Commissioner and the Independent Monitoring Committee said in terms of the very changed situation regarding the Provisional IRA.” File photograph: Eric Luke/The Irish Times

Minister for Justice Frances Fitzgerald has moved to play down any suggestion of a difference between the PSNI and the Garda in their assessment of any security threat posed by the Provisional IRA in the wake of the Kevin McGuigan murder.

Speaking on Sunday at Béal na Blath in Co Cork where she delivered the oration at the annual Michael Collins commemoration, Ms Fitzgerald said: “There is no difference in fact when you look at what the Chief Constable said and what the Garda Commissioner and the Independent Monitoring Committee said in terms of the very changed situation regarding the Provisional IRA,” she told The Irish Times.

Ms Fitzgerald was commenting in the wake of comments by Mr Hamilton in which he said the Provisional IRA is committed to following a political path and is no longer engaged in terrorism and that the organisation “does not exist for paramilitary purposes”.

Mr Hamilton was speaking in the wake of the murder of former IRA man Kevin McGuigan in East Belfast, and comments by Det Supt Kevin Geddes of the PSNI that the police in Northern Ireland were investigating whether members of Provisional IRA were involved in the killing.

Det Supt Geddes had said the police inquiry was looking at whether a group called Action Against Drugs (AAD), which includes some former members of the Provisional IRA, was involved in the killing of Mr McGuigan.

“One of our major lines of inquiry is that members of the Provisional IRA were involved in this murder. I have no information at this stage whether this was sanctioned at a command level and I am not prepared to speculate,” he added.

But Mr Hamilton stressed on Saturday that the PSNI had no information to suggest the murder of Mr McGuigan was sanctioned or directed at a senior level in the republican movement.

In March of this year, Garda Commissioner Noirín O’Sullivan said in a letter to Sinn FéinTD Padraig Mac Lochlainn that gardaí had no intelligence or information to suggest the IRA was maintaining its military structure.

Ms Fitzgerald said co-operation between the Garda and the PSNI was never closer in terms of sharing intelligence, and said Mr Hamilton’s comments regarding the PSNI were “very nuanced” and should be studied carefully.

Ms Fitzgerald said it may be the case that former members of the Provisional IRA are involved in criminal activity, and that this was being investigated, but urged caution until the inquiry into Mr McGuigan’s “heinous murder” was completed.

“My information, and it is correct information, is that there is absolutely no difference in security assessment between the Garda Commissioner and the Chief Constable and they are united in their assessment of the security situation,” she said.

Ms Fitzgerald confirmed both she and Minister for Foreign Affairs Charlie Flanagan will meet Northern Secretary Theresa Villiers this week to discuss the situation, and all sides were anxious the peace process would continue to work for the benefit of all.

Ms Fitzgerald denied the Department of Justice had sought to distance itself from Ms O’Sullivan’s letter to Mr Mac Lochlainn regarding the Provisional IRA and said it would not have been appropriate for the Minister to be privy to such a letter.

“If I knew that the Commissioner was putting out a letter, I would be accused of political interference in An Garda Síochána.

“There was never a question of me or the department knowing the contents of a letter such as that - it wouldn’t be appropriate as it’s an operational matter.”