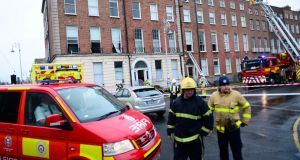 Dublin Fire Brigade were called to a fire at a building in Mountjoy Square in Dublin about 7.20am. Photograph: Cyril Byrne/The Irish Times 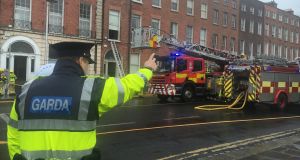 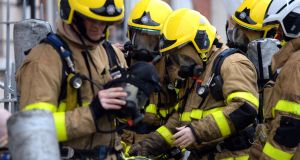 Eleven people have been rescued from the top floor of a burning building in Dublin city centre on Tuesday morning.

A spokesman from Dublin Fire Brigade said crews battled the blaze in Mountjoy Square for about six hours .

He said five people were taken to hospital for treatment for smoke inhalation but no serious injuries were reported.

A total of eight fire engines and two ambulances attended the incident at 7.20am.

A turntable ladder was used to rescue five people, the fire brigade said.

It is understood the fire started at a lower level and a number of people were trapped on the top floor.

Mountjoy Square North remained closed for about six hours while emergency services dealt with the fire.

AA Roadwatch advised the area had reopened for traffic about 2pm.