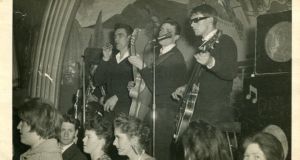 The destroyed Limerick building was home to the Oyster Ballroom, which in the 1960s played host to Jim Reeves and all of the top show bands of the era. Photograph: Limerick Dance Halls project

A historic show band venue, once hailed the largest ballroom in the south, has been completely gutted following a massive commercial fire in Co Limerick.

Eight fire units spent several hours battling the early morning blaze at the Furniture Man in Dromkeen, which broke out at around 3.30am on Sunday morning.

The building was previously well known as the Oyster Ballroom, one of the most successful venues in the country during the days of the showband boom in the 1960s and 70s.

An estimated €500,000 worth of furniture stock was destroyed in the blaze, which completely gutted the building.

It’s understood the fire started in an adjacent storage shed and quickly spread to the well-known furniture store premises.

Limerick city fire crews were alerted to the blaze at 3.40am and spent several hours at the scene along with units from Cappamore, Newport and Rathkeale.

The N24 Limerick to Waterford Road through Dromkeen remained closed on Sunday morning and diversions were in place, while three units of Limerick City and County Service tidied up the scene.

No one was injured in the blaze and it’s not yet known what cause the fire.

Described as the “largest ballroom in the south’ when it first opened its doors in November 1958, the famous Oyster Ballroom in Dromkeen could hold up to 3,000 people.

A clever innovation at time era was the venue’s stage as it could be wheeled forwards and backwards depending on the size of the crowd.

Over the years all the top stars performed at the Oyster Ballroom including Jim Reeves, Joe Dolan, Dickie Rock, Brendan Bowyer and Thin Lizzy who played in April 1980.

Ironically, a special concert to relive the former ballroom’s halcyon days : ‘Rolling Back the Dromkeen Years’ is due to take place in nearby Cappamore Community Centre on August 30th.

1 The far right rises: Its growth as a political force in Ireland
2 Coronavirus: Public health experts considered idea of moving Dublin to Level 4
3 Coronavirus: From midnight Dublin will move to level three until October 10th - Taoiseach
4 President Higgins says British must face up to their history of reprisals
5 Why are some in Fianna Fáil unhappy with Micheál Martin?
Real news has value SUBSCRIBE