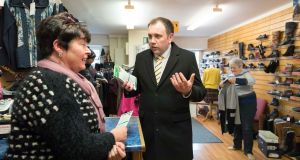 Fianna Fáil leader Micheál Martin has faced a call from one of his newly elected TDs to form a national government rather than enter coalition with Fine Gael.

Clare TD Cathal Crowe, who as mayor of his county was the first to boycott the State’s commemoration of the RIC earlier this year, made his views known at a meeting of the Fianna Fáil parliamentary party on Tuesday evening.

The meeting took place via teleconference due to the coronavirus crisis. The meeting was largely taken up with a discussion on coronavirus but Mr Martin gave an update on efforts to form a government with Fine Gael.

Fianna Fáil and Fine Gael are continuing talks on government formation but progress has been slow. Mr Martin is understood to have told his TDs that the next government will have to make unpleasant decisions.

He said talks with Fine Gael are continuing on a government of “equal partnership” and a “clear majority” administration is needed.

Carlow Kilkenny TD Jennifer Murnane O’Connor and Waterford TD Mary Butler are said to have called for party unity, interpreted as supporting efforts to form a government with Fine Gael.

John McGuinness, also a Carlow Kilkenny TD, asked if Fianna Fáil had reached out to all parties and whether there was a response from Sinn Féin. He said a government should be formed and argued there is an obligation on Fianna Fáil to talk to all parties since progress with Fine Gael is slow.

Mr Crowe expressed concerns about coalition with Fine Gael and said such a government would not be able to implement policies Fianna Fáil wanted due to the economic damage caused by Covid-19.

He instead called for a national government for the coming months and said coalition with Fine Gael would be damaging for Fianna Fáil.

“He suggested national government for period while people got to grips with what was going and it was up to everyone to participate in it,” one TD on the call said. It is the first time Mr Crowe has taken such a position.