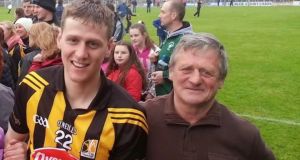 Lester Ryan, Kilkenny’s linchpin, is in mourning after the sudden death of his father, Johnny. Photograph: Cathal Noonan

A Kilkenny farmer has become the first farm fatality of the year in this State after dying in a machinery-related incident at his farm.

Johnny Ryan, aged in his early 60s, died when he was pinned against a wall by his tractor at his farm at Dunbell near the village of Clara, after 11am. Kilkenny’s All-Ireland winning hurling captain, Lester Ryan, is his son. Lester, a teacher at St Kieran’s College in Kilkenny city, lifted the Liam McCarthy Cup in Croke Park after last September’s All-Ireland hurling final replay. He and the rest of the family were said to be “devastated” by their sudden loss.

Mr Ryan, whose family is “steeped in the GAA” and was a prominent GAA official, coach and steward after his playing career ended, is survived by his wife Lily and sons Lester, Tom and Liam.

He captained the Kilkenny over-40s hurling team to an All-Ireland title some years ago. As a mark of respect to Johnny Ryan and his family, Kilkenny have pulled out of the Walsh Cup inter-county competition in which they were due to compete this weekend against NUI Galway on Friday and Carlow on Sunday.

Gardaí at Thomastown in Co Kilkenny as well as the Health and Safety Authority are investigating the circumstances surrounding the incident on the Ryan family farm. It is believed Mr Ryan had been using his tractor to spread slurry and had got out of the vehicle when it suddenly rolled backwards, causing fatal injuries.

Chairman of the Kilkenny GAA county board Ned Quinn described Mr Ryan’s death as “an awful tragedy” which had the entire area in shock. “I want to express our sincere sympathies to his wife and to Lester and all the family,” said Mr Quinn. “Johnny was an outstanding hurler himself. The whole family are steeped in the GAA.”

Clara GAA club chairwoman Carmel Brennan said last night the entire parish was “stunned” by the death, describing the family as “the backbone of the club” and always involved in various parish activities and committees. “Johnny and his brothers were always the first to volunteer, be it stewarding or parking cars, preparing for matches, etc,” she said. “In fact we had a job to convince Johnny not to steward in a car park on the night of the homecoming when Lester was bringing back the Liam McCarthy Cup to our club the Monday night after the All-Ireland.”

She added that Johnny’s father Liam was a founding member of the club while Johnny himself started juvenile training for young players on Saturday mornings. “We are stunned and saddened by his untimely death,” she concluded.

All three of Johnny Ryan’s sons play senior hurling with Clara and were on the team which won the 2013 Kilkenny senior championship for the first time since 1986, thereby elevating Lester to the county captaincy. The 1986 team included the late Johnny Ryan.

Parish priest Fr Laurence O’Keeffe said Mr Ryan was a very popular member of the community and the GAA. His family are “just devastated” by what happened, “as indeed is the whole community,” he said.

Mr Ryan’s death comes one day after the Health and Safety Authority said it was reducing the number of farm inspections from 2,900 in 2014 to 2,300 farms this year. It said it was doing this to free up inspectors to take part in activities such as discussion groups and farm walks which could have a greater influence on farmers. Thirty people died in farm accidents in 2014 - the highest number of deaths in 23 years.

The first farm fatality in Northern Ireland this year occurred on Tuesday when a man in his 50s fell from a roof on a farm near Craigavon in Co Armagh.

Farm organisations expressed their dismay at the latest farm fatality. IFA president Eddie Downey said it was a very difficult time for family, neighbours and friends of Mr Ryan. He said IFA would re-double its efforts to promote the importance of farm safety and he encouraged all farm families to adopt the highest level of vigilance in their daily work.

ICMSA president John Comer said he was greatly concerned at the huge increase in the number of deaths on farms. However, he rejected the suggestion from EU agriculture commissioner Phil Hogan that farmers should face deductions from their farm payments for safety breaches. He said this would only add to the stress of farmers.

“We’d like to see the commissioner utilise the CAP rural development plan to address the safety concerns on Irish farms in a proactive way and positive way that brings people with him - and not by way of imposing yet more regulations and requirements that introduce the time-stress factors which could well be a part of the problem in the first place,” Mr Comer said.

The decision to postpone Kilkenny’s matches, which was accepted by the Leinster GAA Council, was also made in response to the ongoing search for Derek Tyrrell, cousin of All-Star Kilkenny hurlers Tommy Walsh and Jackie Tyrrell, who is believed to have fallen into the river Nore at the weekend and has not yet been found.

The 33-year-old Mr Tyrrell attended a house party in the St Canice’s Mill area of Thomastown early on Sunday morning and was subsequently seen near the river. The search has focussed on a stretch of the Nore between Thomastown and Inistioge.