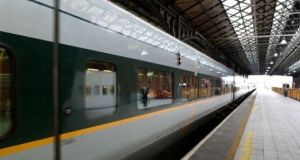 The Government’s failure to finance the Greater Dublin Area Transport Strategy “has the potential to undermine the economic recovery that is taking place”, the chief executive of the National Transport Authority has said.

Anne Graham said a congested capital city also has the potential to “stifle the provision of housing”.

Addressing the Oireachtas Committee on Transport on Wednesday Ms Graham said the cost of all the measures in the strategy is €10 billion, which averaged €500 million each year over the 20 years, to 2035.

However, she said many of the measures in the strategy such as rail improvements, typically took a long time to plan and commission, and the current capital funding is “not at the levels required to meet the GDA Strategy goals”.

She said just €350 million was provided for each of the next three years for public transport – a figure which also included the money required to maintain the State’s entire railway network.

The authority also revealed that growth in demand for public transport in the capital, currently at about 5 per cent per year, is expected to accelerate with sustained economic recovery and population growth.

In the context of projected population growth Ms Graham said it is “unlikely that all such demands can be met within existing service provision and capacity”. She said this was particularly the case “within the city and urban networks where population growth will be highest. And where existing peak capacity is already well used.”

She said funding for the strategy is short by about €300 million per year. “We would like to see it made available so we can meet the objectives of the strategy” she said.

Hugh Cregan deputy chief executive of the authority revealed that among the improvements to public transport over coming years would be a park-and-ride site at Woodbrook, north of Bray in Co Wicklow and expansion of the park-and-ride facility at Greystones, also in Co Wicklow, which is the Dart terminus.

He said a third park-and-ride site is planned for Quarryvale at Lucan, but as this is not on a rail line significant improvements would have to be put in place to the bus service “or it wouldn’t work”.

Brendan O’Brien of Dublin City Council said it is planned to remove parking spaces on parts of the city quays and install a “double-lane cycleway”. He said the city had tried to make coach spaces available, “for example in Nassau Street”. But he said it is clear that in relation to surface parking “we can never cope with the number of coaches that want to be in the city”.

Outlining projects in the Dublin transport strategy which include planning for Metro North, bus improvements and Dart Underground Ms Graham said “the city region cannot wait for these projects to be delivered.”

“ Rail projects have a long lead-in time. Work must commence immediately on improvements to the bus infrastructure across the region in order to meet the growing demand and offer an attractive alternative to car drivers,” he added.