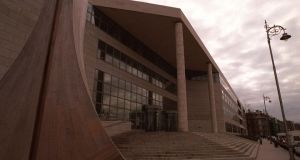 The exhibition ‘The Archaeology of Roads and Light Rail’, to be held in Dublin City Council’s Wood Quay venue this week, is part of Heritage Week. Photograph: Frank Miller

“The Archaeology of Roads and Light Rail” is the title of an exhibition detailing what has been learned from recent road-building schemes and the Dublin city-centre Luas line, to be held in Dublin City Council’s Wood Quay venue this week.

The event is being organised as part of Heritage Week, which will also feature a talk in the DLR Lexicon in Dún Laoghaire on Friday evening outlining what we now know of Carrickmines Castle and the historic remains that were a centre of controversy around the building of the M50 Dublin ring road.

The Wood Quay exhibition is being hosted by Transport Infrastructure Ireland, the new body which encompasses the former Railway Procurement Agency and the National Roads Authority, and will feature a wealth of knowledge unearthed during the motorway building programme.

The exhibition features images, some computer-enhanced, of a Neolithic house which is about 4,000 years old and will see the launch of Illustrating the Past: Archaeological Discoveries on Irish road schemes” . The book is the latest in a series of some 20 books on archaeology produced as part of the roads programme.

Julian Richards of heritage programme Meet the Ancestors will also give a public talk.

There will also be an opportunity to hear about some remarkable archaeological and historical discoveries from work on the Luas red and green lines and the current Luas cross-city project. Included in the artefacts uncovered are bells from outside Trinity College, as well as items from a cholera victims’ graveyard at Broadstone.

The exhibition runs from 3.45pm to 6pm and visitors are asked to register on 01-6658859 or 01-6463400. Registration is necessary. See tii.ie/news/archaeology/archaeology-and-heritage

On Friday at 7pm in the DLR Lexicon, Jason Bolton will give a modern perspective on medieval fortifications. The talk will include reference to Carrickmines Castle and what was learned from the discovery of the castle fosse. Further information from Dún Laoghaire Rathdown County Council’s heritage office (01-2054868) or Transport Infrastructure Ireland (01-6658859).

Voting under way in the Dáil to elect the next taoiseach 19:13
Woman left in middle of nowhere after being raped by three Dublin teenagers, court told 18:56
Harris signs order to designate coronavirus as a notifiable disease 18:42
Patricia O’Connor murder trial: Jury asked to park ‘shocking’ nature of case outside door 18:37
Teenage girl (16) killed in Cork crash named as Kimberly O’Connor 18:30