Every vote counts in head-to-head between Gildernew and Elliott 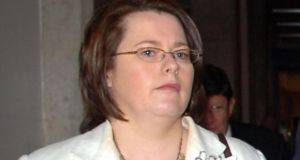 Michelle Gildernew: after the courts examined the 2010 result her margin of victory over agreed unionist candidate Rodney Connor was reduced to a single vote. Photograph: Justin Kernoghan

Out on Irish Street in Dungannon, Co Tyrone, Michelle Gildernew meets her nephew Jordan. “Ah no, I didn’t manage to get registered to vote; I left it a bit too late,” he says rather sheepishly.

Gildernew won this seat for Sinn Féin by 53 votes in 2001, and by four votes five years ago. She says that after the courts examined the 2010 result her margin of victory over agreed unionist candidate Rodney Connor was reduced to a single vote.

In 2005, when it was a straight fight between the North’s four main parties, she won it comfortably. This time she again faces a single unionist candidate, Tom Elliott, former leader of the Ulster Unionist Party. Jordan’s lost vote could be very important.

“I tell you he would not be well if that’s the vote I need,” says Gildernew of her nephew.

Over in Ballinamallard, in the neighbouring county, Tom Elliott is also hearing how unionists are very conscious that, in Fermanagh-South Tyrone, votes are of a higher currency than in the North’s 17 other constituencies. “Four votes – that’s what they talk about on the doorsteps,” says Elliott. “They tell me they know four people who didn’t vote the last time. Well, if all those ‘four votes’ come out this time it could possibly get me in.”

On canvass with Gildernew and Elliott, the recent past and conflict is never too far away. 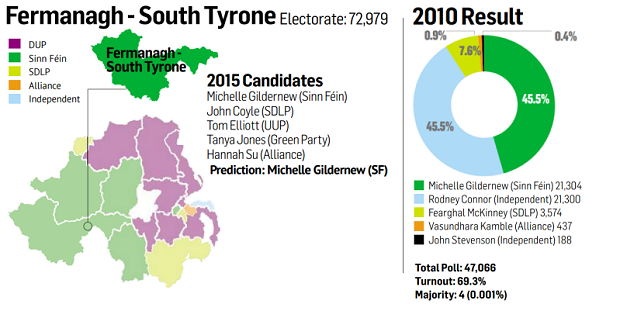 In the space of a couple of minutes in Dungannon, the Sinn Féin candidate meets and converses, first with a woman whose close relative was killed by the notorious Glennane Gang of loyalists and rogue RUC officers and Ulster Defence Regiment soldiers, and then with a woman whose brother was one of eight IRA men shot dead by the SAS in Loughgall, Co Armagh, in 1987, a civilian also dying in that ambush.

Later, in Ballinamallard, the UUP candidate chats to the grandchildren of a couple killed in the 1987 IRA Enniskillen bombing that ultimately claimed the lives of 12 people and then to the wife of a former UDR soldier badly injured in an IRA bombing, and still carrying the scars and the pain.

There are five candidates competing – more women than men, three against two, which is unique in the North in this election. Martin McGuinness pushed for the SDLP to stand aside here, but leader Alasdair McDonnell said he would not engage in “sectarian head count politics”.

The SDLP is running young councillor John Coyle, who had a disastrous outing when debating with the other candidates in a BBC election programme. He must get on with his campaign as best he can. Tanya Jones is standing for the Green Party, Hannah Su for Alliance.

But this is a straight head-to-head between Elliott and Gildernew. Her chances would be improved if some of the SDLP vote transferred to her. In the straight four-way 2005 battle, the SDLP candidate Tommy Gallagher won 7,230 votes. Five years ago, when Gildernew faced Independent unionist Rodney Connor, the high-profile SDLP candidate Fearghal McKinney saw that vote more than halve to 3,574 votes.

That didn’t reflect a particular animus against McKinney, just a do-or-die Orange v Green reality that is also a big factor here.

In Dungannon and Ballinamallard, Gildernew and Elliott make their charge and counter-charge against each other. “People know it’s either me or an ex-UDR, ex-Orange Order grandmaster, who has views on the GAA and on discrimination that most people in this constituency, from whatever walk of life, don’t share,” says the Sinn Féin candidate.

The “GAA and discrimination” attack is over Elliott’s refusal to attend a Gaelic football game in the North or a gay pride parade.

The fact is that these are two agreeable politicians, notwithstanding large differences in their perspectives on the past.

MP since 2001 and now on her fourth Westminster campaign, Gildernew must have the advantage, although with perhaps more unionists on the voting register this time it could again be very, very close – with every single vote counting.