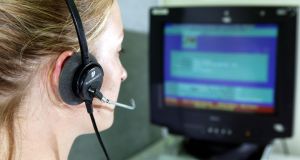 Staff operating the 999 emergency call answering service are planning to ballot for industrial action in a row over pay and conditions.

The Communications Workers’ Union, which represents the workers, is seeking salary levels to be raised to € 11.50 per hour which is classified as a “living wage” by campaign groups.

The national emergency call service is operated under contract by BT Ireland/Conduit.

The CWU has also called for a review of “on-call” policy towards its workers and full recognition of the rights of workers operating the 999 service to representation and collective bargaining through their union.

The CWU said the company had refused to meet with it. It said its members believed they had “now exhausted all avenues and have no alternative but to proceed with a ballot towards industrial action”.

The CWU said it had written to BT/Conduit to advise the company of its intention to conduct a ballot within seven days “if there was no genuine effort on their part to resolve the issues at the centre of the dispute”.

CWU general secretary, Steve Fitzpatrick, said: “The 999 workers are delivering a vital public emergency service and they play an essential role in the first responder services to protect life.

“It is unacceptable that they are paid low wages and are forced to endure a petty and vindictive management regime that flouts common decency and the respect that workers are entitled to in the workplace.

“Our members have now exhausted every avenue available to them to avoid balloting for industrial action but, by continuously ignoring their concerns, Conduit and BT Ireland left them with no other choice.

“These workers do a tough job that is of vital importance to the safety of the Irish public with little recognition of stress this entails and the dignity they are entitled to at their place of work.”

The contract for the Emergency Call Answering Service (ECAS) was awarded to BT Ireland in 2009 by the Department of Communications. BT then outsourced the work to Conduit Global.