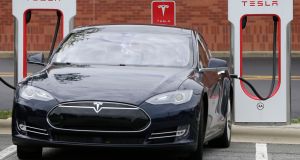 There are not enough fast charging points to ensure the required take up of electric vehicles in Ireland, Minister for Energy Denis Naughten has said.

Mr Naughten, who is considering ways to incentivise the take up of electric vehicles, said he was currently in talks with the ESB and others in a bid to improve the network of fast charge points.

A fast charge point however, can charge an electric vehicle up to 80 per cent in as little as 25 minutes.

The ESB’s eCars network currently has only about 70 fast chargers in the Republic of Ireland, with 15 in Northern Ireland. Queues are frequently seen at these fast charge charge points, and there have even been incidents of charge-point rage.

Speaking to The Irish Times , Mr Naughten said a “low emissions taskforce” between his department and the Department of Transport was looking at issues such as free parking in cities or allowing electric vehicles to use bus lanes.

“But what we are doing within the department in tandem with that work, we are looking at a Dublin Bikes type scheme - anything that can increase the number of people who have tried one and who are therefore considering purchasing one”.

He said he had “discussions quite recently with the ESB on that. Do we need more fast charging facilities, yes we do. We are engaging with the industry on that”.

The ESB said it “fully supports the Minister’s views on the need for greater electric vehicle (EV) uptake and the necessity for a robust and extensive EV charging infrastructure”. But it said a public consultation on the future ownership of the network was currently underway with the Commission for Energy Regulation and until this process is complete the ESB was not “in a position to install any additional infrastructure”.

3 Wife and partner of men who died in sewer incident secure settlements of €175,000