TV Review: Kathy Sheridan says problem about political debate is there is nothing new under the sun 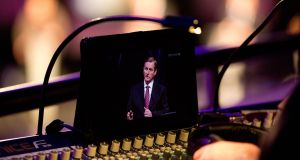 Enda Kenny adopted the same statemanlike air of last week’s debate, remaining on the ringside for the most part until called upon to comment. Photograph: Oisin McHugh FusionShooters.

Call us childish but the most diverting element of the debate was when Micheal Martin dropped his prompt-sheet on the floor around 30 minutes in and it fluttered tantalisingly towards Enda’s lectern.

The Taoiseach pointed towards it stiffly like the class swot, upon which Micheal proceeded to drag it back with his foot. It was pretty cool, but only because there was so little else going on to keep us awake. Moderator, Claire Byrne, implored the speakers to be respectful to each other, to the audience and the people at home. And to leave the jargon out – “if you leave the jargon out, it’s bonus points”.

The problem about political debate is there is nothing new under the sun. Snarky comments about Donald Trump and “dancing girls” and red carpets are old – even if they did get a round of applause from a rather generous audience.

There was more of it when Gerry Adams got very exercised upon being challenged by Michael about being “a member of the IRA for 30 years” and blustered about whether the question would help anyone who was hungry tonight. As a tactic, it was blindingly transparent but it worked. Micheal looked a touch lost for a few minutes before climbing back on the horse.

Richard Boyd Barrett also got a round of applause when he resisted the suggestion of a growing economy by asking whether the jobs were real jobs. His attitude was one of a cool and mildly entertained observer and he did himself no harm, if coming across as somewhat light on policy. Enda who started off rather stiffly and drew heavy sighs when he came up with one of his obligatory stories about the man he met on the street (this time in Ballyhaunis, although it was in response to the man Gerry met who was weeping about his family in Australia), adopted the same statemanlike air of last week’s debate, remaining on the ringside for the most part until called upon to comment. He did seem to roll his eyes more than usual when Lucinda entered the fray in her lucid fashion. A natural, passionate debater, her remark that there are 120 ways of avoiding tax in this State may not have been original but it made its mark.

Joan Burton looked like a woman who is working 24 hour days but she animated the early part of the debate with an energetic, combative style. A deeply unscientific straw poll however, handed the laurels to Stephen Donnelly, sharp and businesslike, keeping his counsel, unpatronising and fearless about delving into slightly convoluted detail about USC billions. “Donnelly for Taoiseach; Byrne for Ceann Comhairle”, texted a political rival of Donnelly’s.

And yet, we missed the disrespect and the shoutfest. And the jargon. And is it so bad to want a little wit and diversion with your information? Shane Hegarty in a tweet, spoke for many of us when he wished for Eamon Ryan to burst through the backdrop and stumble onto the set raging about bikes while chased by security.