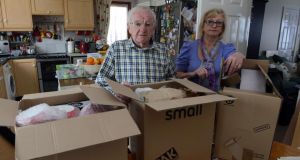 Séamus and Valerie Delaney at their rented home in Dodder Crescent, Firhouse, Co Dublin, which they have been asked to vacate. Photograph: Cyril Byrne

An elderly couple have been told they must vacate the home they have rented for 15 years because the house has been repossessed from their landlord.

Séamus (72) and Valerie (62) Delaney must leave the house by midnight tomorrow.

The two-bedroom house in Firhouse, Co Dublin, has been repossessed from their landlord. The first notice they got was on December 17th last in a letter from Shane McCarthy of KPMG Restructuring telling them he had been appointed as receiver to their home.

“I wish to confirm it is my intention to dispose of the property,” he told them and said Real Estate Alliance.ie had been appointed to manage the property. He asked them to contact REA “in relation to your tenancy”.

Valerie has two daughters from her first marriage – Vanessa and Tanya – who have been helping them deal with the agent and with trying to find a new home. The sisters share a two-bedroom apartment and so cannot house the couple.

The Delaneys have a combined income of €490 per week. They have always paid the rent, which has fallen from €1,250 per month some years ago to €900, on time.

They are entitled to rent-allowance of €341 per month. According to rent caps imposed by the Department of Social Protection they should only pay €750 a month. They have been “topping up” by €559 of their own income.

Mobility problems Séamus, a retired lorry-driver and tarmacadam worker, has mobility and respiratory problems and uses a nebuliser at night. He often needs to sleep in another bedroom and so they need a two-bedroom house or ground-floor apartment.

“We have been looking for somewhere since January,” says Valerie.

They have been worried about whether they will get their €1,800 deposit back. On May 11th they got a letter from REA saying:

“The obligations of the receiver do not extend to refunding a security deposit . . . However, in this instance, on the basis you vacate the property by 28th May as per the 112 days’ notice, as a gesture of goodwill the receiver is prepared to refund two months’ rent to you on the day you vacate”.

Real Estate Alliance.ie did not return calls from The Irish Times last night.