Eagle that was about to lay eggs poisoned in Connemara 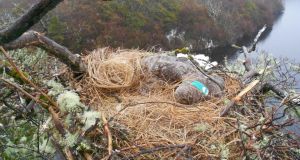 The dead sea eagle found in her nest only weeks before laying eggs. It’s the 13th poisoning to have occurred since the birds were reintroduced to Connemara 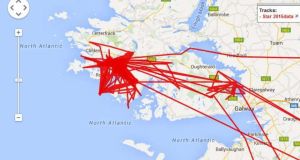 The migratory route of the white-tailed sea eagle that was reintroduced to Ireland in 2008.

A white-tailed eagle who was just about to lay several eggs died of poisoning at her nest site in Connemara, according to toxicology test results.

The body of the six year-old female was found on April 1st on her nest in the Roundstone area by National Parks and Wildlife Service (NPWS) conservation ranger Dermot Breen, who said it was “very disheartening” and a “very sad and sickening sight”.

Minister for Arts, Heritage and the Gaeltacht Heather Humphreys described it as a “major blow” and a “very serious incident” which effectively puts an end to any breeding attempt by the species in west Galway for at least five years.

It is the 13th such poisoning case since the re-introduction project, which is managed by the Golden Eagle Trust and the NPWS, began in 2007.

The female, named “Semi-Circle” after a symbol on her wing tag, had paired up with the male known as “Star” after she arrived in Connemara in 2012.

They were one of two pairs of white-tailed eagles in Connemara, with the second pair known to be frequenting the Maam Cross-Screebe area until several months ago, when tracking batteries ran out.

“Semi-circle”, who was born in 2009, was one of some 100 young eagles collected from nests in Norway and released in Killarney National Park, Co Kerry.

She had laid eggs last year which failed to hatch, but it was anticipated that she would be successful this season.

A postmortem on her body conducted in the State’s regional veterinary laboratory in Athlone, Co Westmeath found confirmed that there were two eggs in her reproductive tract.

Toxicology analysis conducted at the State laboratory in Celbridge, Co Kildare confirmed late this week that she had been poisoned.

Her mate, “Star”, left the area about a week after her death and was tracked as far east as Westmeath and Laois.

“It is a pattern that where one mate dies, the other deserts the territory- so we fear that he may move on. It could take him another five years to mate again, if he stays here.

Mr Breen said he had e encountered no negative feedback from any local farmers with regard to the presence of the eagles over the last three years. “Many landowners would ask how the eagles were doing and would tell me if they had been lucky enough to see them in the locality. The loss of this female is also a great loss to tourism in the area,” he added.

He said her mate “Star” had “travelled the length and breadth of Ireland several times before settling in Connemara” and it was “tragic to see him lose his mate just on the point of nesting”.

Dr Mee said that in spite of the losses, some 14 pairs were still in the wild in 2014, with most birds now mature enough to breed. The first wild-bred chicks fledged successfully from a nest in Co Clare in 2013, with a further chick born last year.

Up to 14 pairs of the white-tailed eagled were known to have bred in the Connemara region up to 1838, but the population declined rapidly with the introduction of poisoning.

Poisons to control foxes and crows have been banned since 2010, the NPWS says, but the illegal use of such substances remains an enormous threat to wildlife, it says.

Birds of prey which consume carrion are very vulnerable, and the extensive range covered by the birds means that contaminated material could have been picked up anywhere.