Each of the three pillars of State has failed catastrophically, MacGill summer school is told 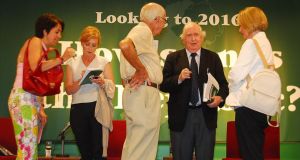 Professor Dermot Keogh having a chat after one of the talks at the Patrick McGill Summer School, in Glenties. Photograph: Michael O Donnell.

Each of the three pillars of State has failed catastrophically, journalist and author Fintan O’Toole has told the MacGill summer school.

Partition, which was both inevitable and tragic, and produced perhaps two failed states, he said. “The North failed in obscene violence but the South failed in a slower fashion and the southern State has also lost legitimacy.”

He urged the summer school to look at the three pillars of democratic government and he suggest each was failing.

“The Dáil is not a legislature; it doesn’t initiate legislation, it is poor in its ability at accountability and it has got worse since the start of this crisis.

“Secondly, the legal system, which gets away with more than most. It has failed in relation to the crimes which have done most damage to society.

“No bishop has been prosecuted for facilitating child rape. There is systemic corruption of the planning system. There is complete failure of the justice system. People are not individually corrupt but there is systemic failure.”

He said central government, the executive, “is failing as it is being run by a subcommittee of four men and their unelected advisers who are accountable to nobody”.

He said the exercise of true democracy was possible if obvious gaps were addressed. “Why is nobody ever accountable for anything. We need clear lines of accountability.”

Challenges
Green party leader Eamon Ryan and former minister responded saying it was very difficult for individual politicians and for politics in general to respond to modern challenges. Electorates mistrust simplistic answers trotted out by some politicians, he said.

“The electorate are not stupid, they are sceptical of those who offer easy solutions.”

The easy ideological ding-dong – the left-right divide – doesn’t wash any more, he said. Third Way politics underestimated the self-destructive capabilities of the market system and the media world, he added. “2008 was a fissure which demands a total response given the overall complexity of the situation.”