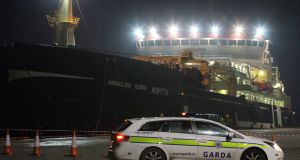 Five Dutch and Lithuanian-owned “supertrawlers”, which have left Irish waters after fishing off the west coast, were not boarded by the Naval Service because the weather was too bad, it has emerged.

The presence of the trawlers over the past couple of weeks has caused mounting concern among Irish fishermen, with claims that they were “pillaging” Irish waters. The vessels, including the world’s largest and second-largest freezer trawlers, were legally fishing for herring and mackerel. The Naval Service detained the Dutch-owned Annelies Ilena – formerly the Atlantic Dawn – earlier this year and its skipper was convicted of breaching EU fishing regulations.

The vessels were monitored by the Sea Fisheries Protection Agency (SFPA) and the Naval Service during their time in Irish waters. Because of their size and ability to process catches immediately, they had been identified as “high priority” inspection targets, but inspections could not be carried out “due to adverse weather and sea conditions”.

“Boarding vessels of this size at sea creates specific challenges and, to date, the operational decision of the Naval Service has been that weather has been too severe,” the SFPA said. Demanding action against them in future, chairman of the Irish Wildlife Trust Pádraic Fogarty said: “They are so big, they have the potential to catch whales if they were to run into one.”

The boats are banned from discarding fish under EU rules but, according to the trust, marine life that does not have commercial value is thrown back. This can include dolphins, turtles and sharks.

The country where the trawler is registered can place observers on board, but rarely does so. EU states in whose waters the trawlers fish can do so too, but only as part of a scientific programme.

Independent MEP Luke “Ming” Flanagan said such trawlers should dock at an Irish port for inspection before leaving. Irish inspectors should monitor what they eventually unload in their home ports.

“We know from experience the trawler operators break the rules, and the Irish courts have already handed out large fines in two cases. We know also they can evade the Navy and that in any case boarding in the high seas is a dangerous task.”

Despite the declaration by the SFPA that the factory ships have left Irish waters, Sinn Féin TD Martin Ferris said a dozen large foreign-owned pelagic trawlers are currently fishing off Donegal: “Up to 70 per cent of their catch is being discarded, according to reports on Dutch television. They are freezing the prime fish only.

“It is not acceptable that these supertrawlers can come and plunder Irish fish stocks while Irish fisherman are being denied adequate quota and are watching from the shore as their livelihoods disappear into the nets of these huge vessels.”

The Lithuanian-registered Margiris and the Dutch-owned Annelies Ilena can process more than 250 tonnes and 350 tonnes of fish a day, respectively. Both are fishing for horse mackerel, according to the SFPA. “As with all vessels, foreign vessels are required to record their catches and set them against quota, in compliance with EU sea fisheries legislation,” said the authority.

The Margiris was expelled from Australian waters after pressure from environmental and fishing industry groups because of the potential impact of its operations on marine life. The Annelies Ilena fished off the west coast of Africa for a number of years, where it was blamed by local fishermen for their dwindling fish catches.