Silica dust, which occurs when cutting concrete, has been proven to be carcinogenic 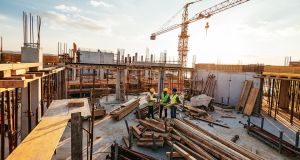 Exposure to hazardous substances in construction, usually through breathing in dust or fumes, can lead to a variety of negative health implications from minor irritation to cancer

Construction workers are increasing their risk of developing cancers later in life by not protecting themselves from dust particles, a senior safety inspector has said.

Michael McDonagh, who regularly inspects construction sites, said that while there is a lot more awareness around the issue of site safety, he believes the health of workers is often overlooked.

“The issue with health is that usually the illnesses have a long latency so for asbestos or silica, for example, it could take maybe 20 or 30 years before the ill health resurfaces,” he said.

“Studies have shown that for every one person that gets killed on site from a workplace accidents, that up to 50 will die later in life from complications and illnesses such as respiratory cancers.”

Mr McDonagh was speaking as the Health and Safety Authority (HSA) announced a campaign aiming to reduce the rate of workplace injuries and deaths. From Monday the authority is undertaking a two-week series of inspections on construction sites across the State.

When people are cutting concrete you see a plume of white dust going up. That is very harmful and causes silicosis

The HSA said five people died in construction-related activity last year, and there were 767 non-fatal incidents reported to the authority. So far this year there have been six reported deaths.

While many workers are aware of the dangers of asbestos, silica dust – which occurs after cutting concrete – is also a carcinogen, which many people are not aware of.

“When people are cutting concrete you see a plume of white dust going up. That is very harmful and causes silicosis, which is a type of cancer in the lung,” Mr McDonagh said.

The inspector said that employees and employers need to take additional steps to protect the health of workers from these sort of particles.

“Things like wetting down the saw so when it’s water sprayed it [the dust] attaches to the saw and it becomes a water slurry as opposed to becoming airborne.

Exposure to hazardous substances in construction, usually through breathing in dust or fumes, can lead to a variety of negative health implications from minor irritation to cancer

“People using respiratory protective equipment and proper masks and on-tool extraction systems as well.You can get vacuum systems that go on all of these tools to extract the dust.”

HSA assistant chief executive Mark Cullen said more must be done to ensure the future health of workers was not compromised.

“With nearly 150,000 employees in the construction industry in Ireland, I am urging industry bodies, employers, trade unions and employees to come together so that all construction workers can return home safe and healthy from work every evening.

“Exposure to hazardous substances in construction, usually through breathing in dust or fumes, can lead to a variety of negative health implications from minor irritation to cancer. Many of these diseases are long term and worsen over time. Prevention is the best strategy.”