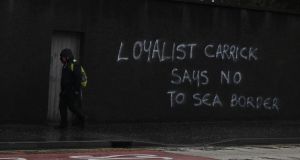 The DUP is beset on all sides: by those in its grassroots who advocate a harder line; by an Alliance party which is attracting more moderate voters; and by the spectre of loyalist violence. Photograph: Brian Lawless/PA Wire

Hot on the heels of the debacle following the European Commission’s almost-triggering of Article 16 of the Northern Ireland protocol came a plan from the DUP to get rid of it entirely.

This, as outlined by the party on Tuesday evening, includes a familiar rallying cry for unionism to unite, in this case to send a common message to London, Brussels and Dublin that Northern Ireland “must be freed from the protocol”.

In conjunction with this, the DUP says it will halt all North-South activity related to the protocol, oppose it in the Northern Assembly and seek support for its cause in the UK parliament, bolstered by an online petition.

Quite what this will mean in practice is unclear; what is evident is that the febrile mood in the North – heightened tensions and anger in loyalist areas which has manifested itself in graffiti and the withdrawal of port staff from work over fears for their safety – has also thrown into relief the pressures facing Northern Ireland’s largest unionist party.

The DUP is beset on all sides: by those in its grassroots and other parties such as the Traditional Unionist Voice (TUV) who advocate a harder line on Brexit; by an Alliance party which has proven increasingly attractive to more moderate voters from a unionist background; and by the lingering spectre of loyalist violence.

The most concerning headline of the week from the DUP point of view was around polling carried out by Belfast-based pollsters LucidTalk which put the DUP on only 19 per cent, down four percentage points. The only parties to have increased their popularity were Alliance, which went up two percentage points to 18 per cent, and the TUV, which added four to reach 10 per cent.

Its party leader Jim Allister – who effectively is the TUV – has been a constant thorn in the side of the DUP and has long advocated even more stringent measures to disrupt the “evil genius” of the protocol, and though his party has struggled to grow its following beyond his personal stronghold in North Antrim, it is self-evident that these figures give cause for concern.

Faced with this, the DUP plan can be interpreted as an attempt to take control of the situation and reassert its position as the leader of unionism in Northern Ireland by emphasising its pro-union, anti-protocol credentials. For the party leader, Arlene Foster – beset with rumours about the weakness of her own position which simply won’t go away – it was an opportunity to do the same.

That the DUP may have succeeded, at least in the short term, was evidenced in the response from the unionist Belfast News Letter, which judged that the party had “suddenly toughened” its stance on the Irish Sea border, and this was “welcome... indeed overdue, from Northern Ireland’s largest unionist party”.

Thanks to the open goal offered to them by the European Commission almost triggering Article 16, unionists’ concerns over the protocol are now firmly in the Irish, British and European spotlight and are being discussed at the highest level. Ironically, it is in this arena where a resolution may be found for both the DUP and Northern Ireland.