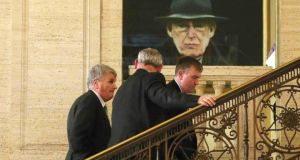 The DUP Westminster election campaign has been thrown into disorder after the party’s Minister for Health, Jim Wells, was forced to resign over remarks linking same-sex couples to child abuse.

First Minister Peter Robinson and the DUP leadership stood by the South Down Assembly member until the weekend, but news of a further incident involving a lesbian couple compounded his problems, leading to his announcement yesterday morning that he was resigning.

Up to Sunday night it appeared Mr Wells might survive calls to resign. It then emerged, however, that a lesbian couple alleged he had questioned their lifestyle when he canvassed their home in Rathfriland, Co Down, on Saturday.

On two occasions Mr Wells, who is standing for the DUP in South Down, sought to apologise to the couple but this just seemed to exacerbate the issue, with a complaint made to police on behalf of the couple. The fact the Assembly was yesterday debating a proposal on same-sex marriage also made him vulnerable to continuing attack and also continuing bad publicity for the DUP.

Mr Wells also referred to his remark that a child with same-sex parents is “far more likely to be abused and neglected”. “I have already said sorry for the offence caused and acknowledged that the comments were factually inaccurate. At no time did I set out to hurt or offend anyone,” he said. He also said he and his family had been subjected to “abusive and menacing” attacks on social media.

Mr Robinson paid tribute to Mr Wells and said: “I do ask people that they should not take on the characteristic of a lynch mob about these matters.”