Analysis: Agreement on forming Executive crucial if spending power to stay in North 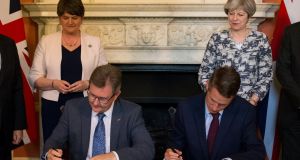 Most politicians at Stormont on Monday acknowledged DUP leader Arlene Foster had nailed a good deal for Northern Ireland. Now the question is: will she and Sinn Féin’s Michelle O’Neill get the opportunity to spend the £1.5 billion she extracted from prime minister Theresa May to keep her and the British Conservatives in power?

That hinges on whether the British and Irish Governments can coax, primarily, the DUP and Sinn Féin into making the necessary compromises between now and Thursday’s deadline for a deal to get the Northern Ireland Executive back in place.

It would be a cruel irony if, having won hundreds of millions in largesse from May, it would be British direct-rule ministers who end up distributing that money rather than Northern Executive members.

The deal also holds out the possibility of bringing forward reducing corporation tax to the 12.5 per cent rate of the Republic by later this year. It also allows the Executive, if it returns, greater flexibility in how it spends an additional £500 million of British government funding that is already promised.

Nobody was so churlish as to dismiss the deal but SDLP leader Colum Eastwood queried if the money would be handed over to the Executive or, if the current talks to restore devolution fail, would it be a case of Tory direct rule ministers “under the thumb of the DUP” allocating the munificence.

“I know who I’d like to do the spending,” he said.

There was lot of talking at Stormont on Monday with Foster flying back from London to join in the negotiations. But it is still unclear whether the main protagonists can resolve differences over the key areas including the Irish language, same-sex marriage and dealing with the past.

There appears to be a possible acquiescence to a British government proposal, also contained in the DUP-Tory package, to put the past out to public consultation based on proposals from the Stormont House Agreement of December 2014.

There could be some form of quid pro quo between the Irish language and Ulster Scots, as long as there is a freestanding Irish language act, that would allow the DUP make a big concession while also saving some face.

There are also discussions around altering an Assembly veto that hitherto has allowed the DUP block any moves towards legislating for gay marriage. That could permit a fudge on the issue but as Minister for Foreign Affairs Simon Coveney said these are proving difficult hurdles to overcome and there is still a lot of “heavy lifting to be done”. The DUP and Sinn Féin needed to move to a position of “accommodating each other”, he said.

Which is why Coveney, Northern Secretary James Brokenshire and Sinn Féin leader Gerry Adams and Foster together with their senior Sinn Féin and DUP negotiating teams were working late into the night striving to ensure it’s the Executive that gets to spend the big money.