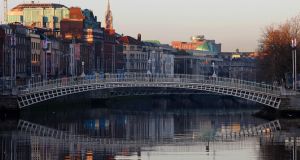 Dublin is the friendliest tourist destination in the world to visit, according to users of Twitter.

Dublin received the most Twitter praise for having welcoming people. Dublin was also the second most enjoyable destination in the world after the French resort of Nice.

Ireland was the fifth most enjoyable country for holidaymakers after Spain, the UK, Italy and Thailand.

The Mexican resort of Cancun scoops top spot for providing the most amazing views followed by New York.

Croatia’s Dubrovnik is described as best destination for food lovers, ahead of Paris, traditionally the gastronomic capital of the world.

The research was conducted by ebookers.com analysing thousands of tweets. It took nine popular phrases used by travellers to describe a location on social media, such as ‘beautiful sunset’, ‘amazing views’, ‘delicious food’, ‘great weather’ and ‘friendly locals’ to discover which destinations generate the greatest level of positive sentiment.

The endorsement comes in a week when six Irish attractions made it onto a list of the world’s top 500 must-see sights of all time, compiled by guidebook publisher Lonely Planet.

The Giant’s Causeway in Co Antrim was the highest ranking attraction in Ireland, voted as the 103rd best place to visit in the world by Lonely Planet staff and writers.

The Cliffs of Moher, Brú na Bóinne, the complex of prehistoric tombs including Newgrange, Knowth and Dowth, the Titanic Centre in Belfast, the Rock of Cashel and Trinity College Dublin also featured in the top 500 list.