Rankings based on cost of night out for two with cocktails, meal, taxi and hotel 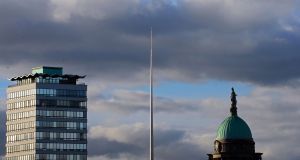 Dublin did not feature in the top 10 most expensive places to have a city break. Photograph: Eric Luke/The Irish Times

Dear old Dublin did not make it into the world’s top 10 most expensive places for a city break, according to the annual cost comparison study published by TripAdvisor this morning, although a night in the city will still set a couple back more than €260.

The Irish capital was listed as the 12th most expensive city in the Tripindex, which compares the cost of an evening out in 48 key tourist cities around the world after totting up the price of a cocktail in a five-star hotel, a meal for two, taxis to and from a restaurant and an overnight stay in a four-star hotel.

According to Tripadvisor, dinner for two in Dublin, including wine, will set you back €72.50, a price that many people may like to take with a side order of salt.

“The research carried out is based solely on the prices for rooms found on Tripadvisor and does not reflect the broad range of rates actually available in the market.

“The vast majority of bednights are booked through other sources, such as directly through individual hotel’s websites, through group bookings, directly with the hotel, and the conference and event market segments,” a spokesman said.

London is revealed as the most expensive destination in the world for a city break, with an evening out and overnight stay in a four-star hotel for two in the British capital setting you back an average of €386.87, over three times the price of a break in the world’s best-value destination – Hanoi in Vietnam – which comes in at an average of €113.78.

Western Europe is home to seven of the top 10 most expensive cities in the world, although three eastern European destinations – Sofia, Prague and Budapest – feature among the world’s 10 best-value destinations.

Cancun is the cheapest city in the world for cocktails: a pre- dinner vodka martini for two comes in at an average of €2.50.

For the same outlay you could get 1½ cocktails in Cape Town, half a cocktail in Hanoi and barely a sniff of the olives in Paris, where a bill of of €38.44 would leave most people shaken and probably stirred.