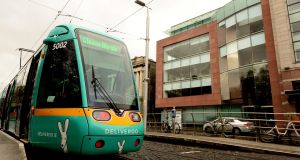 St Stephen’s Green will be flanked on two sides by rail stops under new plans to develop a Metro line linking north county Dublin, via Dublin Airport, to the southside suburbs.

Draft plans stress, however, that there will not be “any major interference” to St Stephen’s Green itself.

It was announced in the Government’s 10-year capital investment plan that the Metro linking Swords to Sandyford will be built by 2027 at a cost of €3 billion.

While the full detail on the Metro has yet to be published, a copy of plans drawn up by the National Transport Authority and Transport Infrastructure Ireland, to be sent out for public consultation in the weeks ahead, have been seen by The Irish Times.

Of an entire 17km between the final stop at the Malahide Estuary beside the M1 motorway, which includes a large park and ride facility, to where Metro Link will join the existing Luas green line at Charlemont on Dublin’s southside, 13kms will be underground. This is a much greater underground element than the last Metro North plan in 2015.

An elevated line will run along the Swords bypass before the subterranean element stretches from before Dublin Airport to Charlemont. The existing Luas green line will be upgraded to an overground Metro line between Charlemont and Sandyford. This upgrade, at a cost of €500 million, is being justified by the need for greater capacity on the line in the years ahead.

The Luas green line will then continue between Sandyford and Bride’s Glen.

Other amendments to previous plans include Metro linking with the Dart network at Tara Street station. In veering east away from the Luas after St Stephen’s Green, Metro will avoid duplication with the new Luas cross-city line.

The Metro route in north Dublin will no longer travel through Drumcondra but will instead stop in Phibsborough, with a station at Cross Guns Bridge on Whitworth Road. It will then travel to Dublin City University, Ballymun, Northwood in Santry and Dardistown before reaching the airport.

While the project is expected to take a decade, there have been calls for the northside element to be completed first.

Paul Reid, chief executive of Fingal County Council, said Metro North had been long planned already and that the northern route should be prioritised.

Mr Reid said Fingal has made substantial provision in its recent development plan for the construction of homes and businesses along the Metro line.

“While the line will go to Sandyford, the real affordable housing on a large scale will be around Swords and north of it,” he said.

Fingal County Council has zoned land around Lissenhall, north of Swords, for about 7,000 homes and associated commercial outlets, although it is dependent on the Metro being built. It also has land around Ikea in Ballymun, as well as other areas south of the airport, zoned for housing.