Dublin drivers are the ‘rudest in Ireland’

One in five cyclists in crash or fall caused by a motorist, says AA Ireland 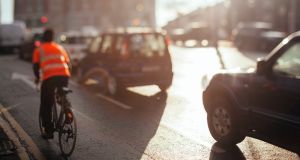 Drivers in Dublin are the rudest on the island, according to AA Ireland. Nearly half of the 7,000 motorists it asked – 47 per cent – named the county as the worst for driver behaviour in their experience. Donegal, at 19 per cent, and Cork, at 5 per cent, came second and third.

At the other end of the spectrum, drivers in Co Tyrone are rated the politest on the island of Ireland, with just 0.3 per cent – or three per 1,000 – of the AA members surveyed rating them the rudest. Drivers in Co Leitrim are regarded as the politest in the Republic.

Conor Faughnan, AA Ireland’s director of consumer affairs, said drivers need to be on the lookout for vulnerable road users. “While it would be wrong to say that rudeness or failure to yield right of way is solely a behaviour found in motorists, in the event of an accident a car is going to cause the most damage. We all have a responsibility to share the road safely, and a key part of this is obeying the Rules of the Road.”